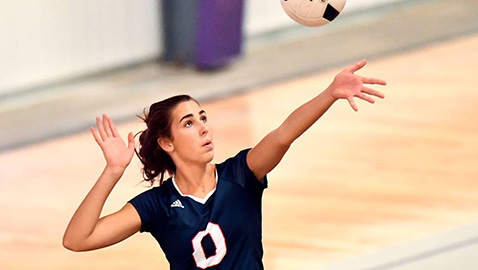 West High School’s volleyball program turned back the clock last season and Mary Austin Slate had a lot to do with it.

Slate, a four-year starter on the varsity team, was “a huge factor in transforming the team from a 10-win season as a freshman to a regular season district championship and district tournament runner-up finish as a junior for the first time in 30 years,” said Head Coach Jessica Lee.

Mary Austin, West’s female Student-Athlete of the Year, didn’t stop there either.

“She overcame a back injury and broken finger in her senior season and helped the team advance even further with a Region 2-AAA runner-up showing, which earned a trip to the Sub-State,” continued Lee.

In the Region 2-AAA finals at Oak Ridge last fall, Farragut captured the title, but Slate had a strong third set.

“Mary Austin’s attitude and energetic personality is something that every coach hopes for to build a team around,” summed up Coach Lee.

Mary Austin also was a high jumper for both the indoor and outdoor track teams in her prep career at West.

Magnuson was top scorer and captain in soccer

Magnuson was a four-year varsity player and three-year starter for the Rebels. He was the leading goal scorer and voted team captain the past two seasons.

“Alex is an outstanding young man,” said West Coach Alex Walls. “He is a natural leader on and off the field, especially through his work ethic.

“Alex also is the type of student-athlete teachers and coaches love to have around, because of their positive influence on others. West High is proud to have Alex Magnuson represent them.”