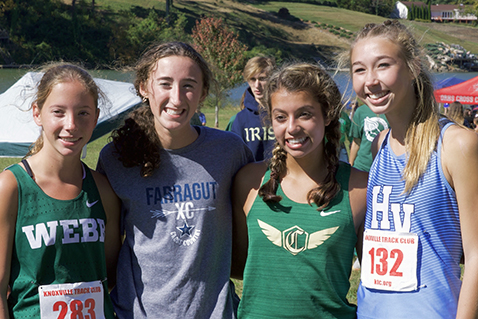 Smith enjoys a ‘cool’ moment on way to KIL win

The most important part of the race was crossing the finish line, but Keegan Smith experienced a “cool” moment long before he got there.

After repeating as the KIL cross country champion this year, the Knoxville Catholic sophomore was asked if anything unusual happened in the race.

“Nothing much, but the Farragut football team was at the other end cheering us on, so I thought that was cool.”

The Admirals were really out there for Farragut senior Trevor Coggin, who ended up placing second behind Smith.

“Yeah they were (cheering for Trevor) but it was still funny seeing other sports come and support us,” said Keegan.

And their cheers for Coggins actually helped Smith a little.

“They let me know how far Trevor was behind me,” said Keegan, “because I passed them and 10 seconds later they were like ‘Go Trevor go!’”

A respectful Smith took time to compliment his longtime competitor after the race.

“I’ve been racing and training with Trevor for a long time now,” said Keegan. “Back in elementary school, we started, and he’s come a long way.

“Today was a very big day for him. I think he definitely PR’d and that’s saying something for this course because this isn’t as fast as some of the other courses he’s run. But he’s a good competitor and he’s really turned the corner this year. Recruiters will start looking at him for colleges next year.”

As for Smith, one can easily see his physical growth over the past year. He may have “grown one or two inches,” but his success hasn’t changed him.

Smith, who won the TSSAA state title as a freshman last fall and is one of the top prep harriers in the nation, is scheduled to race in Scottsboro, Ala., this week. “That’s just kind of a tune-up race before state,” he said. “And then we start post-season.”

Sanders Ferry Park in Hendersonville will again be the site of this year’s TSSAA meet Nov. 3 and 4.

When asked about his future in the sport, Smith said the summer after his sophomore year is when colleges start recruiting. “But a lot of my friends that are juniors and seniors, they all are talking and I’m excited …”

What is he looking for at the next level?

“I just kind of want to go somewhere different, do something new and hopefully find a team with good teammates and a great coach,” he said.

Smith currently has two coaches. “One is my school coach (Sean O’Neil at Catholic) and then I have a private coach (Tony Cosey, who trains young distance runners),” he said.

ADMIRALS PREVAIL: Coach Chelsea Osborne’s Farragut boys, with five of her runners finishing in the Top 10, took the team title with the lowest score of 27 points. Catholic was runner-up with 63 points.

TIMES ADJUSTED: Webb freshman Jazzlyn Garmer’s official winning time in the KIL girls’ race was 18:13 and other girls’ times also were adjusted. Webb teammate Anna Graves, a junior, was the runner-up at 18:16.