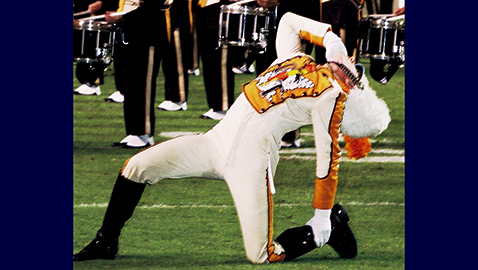 On October 27, 1928, Maj. Bob Neyland was in the midst of his first tenure as Volunteer head coach. The Vols had defeated Alabama the week before in Tuscaloosa, 15-13, led by Gene McEver’s 98-yard return of the opening kickoff. Neyland’s charges were 4-0, having defeated Maryville, Centre, and Ole Miss, before the win over the Crimson Tide in one of the seminal victories in the history of Tennessee football.

Not to be outdone, Buddy Hackman delighted the Homecoming Day crowd, matching McEver’s effort, this time for 94 yards and another quick lead. That led to a 26-3 victory over Washington & Lee.

It was a kinder and simpler era, a time campus life was centered around Ayres Hall, the Carolyn P. Brown Student Center, and Ellis & Ernest Drug Store.

During that year, the university had been seeking an “alma mater,” a song that had to be “original and of high standard.” Prof. J.S. Meyer, head of a campus group charged with selecting such a song, announced the selection at a banquet at the Farragut Hotel the night before the game.

‘’It is not the plan to declare this song the official alma mater hymn unless it captures the hearts of UT students and alumni,” Meyer said. The “right type” of alma mater was of paramount importance.

An outside committee, composed of George B. Nevin of Easton, PA., Harry Alan Russell of New York, and Nathaniel Irving Hyatt of Converse College in Spartanburg, S.C., all apparently big in the music field, had been brought in to make the final call.

The contest attracted wide interest from students and others across the state. A prize of $50, thought to be worth more than $750 today, went to the winner.

Mary Fleming Meek of Chattanooga, Mrs. John Lamar Meek as listed on the sheet music, submitted the winning entry, titled “On a Hallowed Hill.” It won out over one written by Knoxville’s Frances Johnson, by unanimous vote.

Although Mrs. Meek was not a Tennessee alum, she had attended UT’s Summer School of the South. Her husband and son were graduates, and her father had served as a University trustee. Mrs. Meek’s great-grandfather designed one of the Hill’s earliest buildings, Old College, razed in 1919 in preparation for the construction of Ayres Hall.

It remains something unique, just as they had wanted in 1928. It’s not some variant of “ Far Above Cayuga’s Waters,” Cornell University’s school song that is also the tune for numerous other collegiate alma maters, most notably Alabama, Georgia, and Vanderbilt and nearly 20 others. Mrs. Meek’s composition is Tennessee’s and no one else’s.

“Every self-respecting student of the University has memorized the words to the Alma Mater.” An unknown writer penned these words in “The Torch,” an orientation publication from 1944.

Mrs. Meek had looked to the “Torch Night” and “Aloha Oe” ceremonies on campus for inspiration and touched all the bases in composing words and melody. The second verse, for example, begins with the words, “What torches kindled at that flame have passed from hand to hand…”

No one knows the exact creative process that went into the writing of the Alma Mater, but the words and music live on and continue to have an impact on generation after generation of students and alums.

Regardless of the time of year, UT fans stand taller and prouder when those strains echo around Neyland Stadium and the surrounding campus area, as played by the Pride of the Southland Marching Band, complete with solo trumpets. When the chorus swells to, “So here’s to you, old Tennessee,” Vol fans wouldn’t want to be anywhere else. It matches the moment when the orange and white-clad Vols enter Shields-Watkins Field through a giant “T” formed by the band.

“She composed an alma mater, which is not just a custom, but a song in which every line expresses the University of Tennessee’s charm, character, and strength,” Linda McHugh of the U.T. Daily Beacon wrote Nov. 10, 1967.

“As our alma mater is willed from generation to generation, no matter how others may dress, talk or live, they may see that there is a spirit stronger than that in jugs, the Volunteer spirit of mind and soul. Our inward spirit becomes outward when we sing the Alma Mater.”

More than 90 years after Mrs. Meek’s passing in June 1929, her composition, played from the old-fashioned block “T” at the end of the band’s halftime show, positively reflects University of Tennessee collegiate life, from the late 1920s through today.