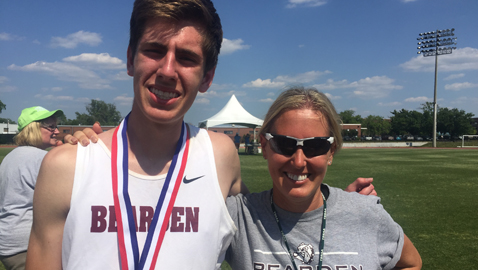 Jacob Sobota of Bearden High was one event away from being the 2016 Class AAA state decathlon champion last Tuesday but had to settle for second place.

It wasn’t for a lack of determination, however, noted Coach Patty Tracy Thewes.

Rhea County’s Chase Sholl ran the final event, the 1500-meter run, in 4 minutes, 49.33 seconds, which was third best among the field and worth 623 points in the decathlon scoring.

“I was very proud of how Jacob performed in the decathlon,” said Coach Tracy-Thewes via e-mail. “He was ill the last couple of weeks, into the start of the decathlon. He did amazing the first day.

“The second day, while setting another PR in the high jump, something happened with his hip flexor, and he was not really in the best of shape, but he was still determined to complete the 1500, and he just grinded it out. He is one tough cookie.”

In the opening day’s first five events, Sobota charged to the lead. The Bearden junior’s best point-getting event was the 100 as he placed fourth with a time of 11.09, good for 841 points. After the 100, he was first in the pole vault (14 feet), second in the discus, third in the triple jump and second in the 400.

A 5-10 mark in the high jump, a tie for third place, was his best showing on the second day.

The Carson-Newman signee, who came back from foot surgery this year after missing almost all of her junior season, posted personal records in each event.

“She showed up in a big way,” texted Carter assistant track coach Derek Witt, who has worked closely with Reynolds the past two seasons.

“Her hard work truly paid off. Probably the two most rewarding events for her were the high jump and long jump.

“We had spent hours trying to get past 4-1 in the high jump.”

Reynolds soared 4-11¾ in the high jump and 17-9 ¾ in the long jump – both good for third place in the field of competition. She also was second in the shot put with a mark of 31 feet and was fourth in the 800 and sixth in the 100 hurdles.