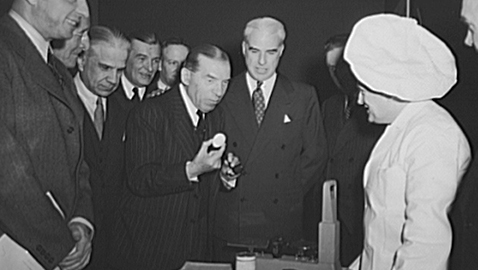 Born in Pekin, Illinois in 1870, Sol moved to San Francisco where he became the manager of a theatre while still in his early teens.  Bloom showed a flair for showmanship and staged several boxing matches with the famous pugilist “Gentleman Jim Corbett.”  Bloom had made enough money to travel to Paris to witness the Exposition Universelle in 1889 when he was only nineteen years old.  Sol Bloom made his reputation as a showman and promoter when he successful developed the Midway at the World’s Columbian Exposition in Chicago after replacing a Harvard professor of anthropology.  Bloom made it such a success, the term “midway” became part of the American vocabulary.  Sol Bloom also invented the “hootchy kootchy” dance, a variation of the belly dance and even composed the tune for the dancers.  An entrepreneur if there ever was one, Bloom became the branch manager of the largest sheet music publisher in the country.  Likely unimaginable in today’s world of music apps, the publication of popular songs and music was a thriving business at the time and many well-off homes kept music chests, which featured trays that pulled out and held the sheet music for families to enjoy with whatever musical instruments they owned.  Bloom fashioned himself as “Sol Bloom the Music Man” and settled into a comfortable home in Chicago after marrying Evelyn Hechheimer in 1897.  The Blooms did not remain in Chicago long, moving to New York City in 1903 where Sol expanded his music business, which operated in many department stores throughout the country and found the time to dabble in real estate.  Bloom did more than dabble in real estate; he either renovated or built more than a dozen theatres along Broadway’s famous “Great White Way.”  One of the theatres built by Bloom was the Apollo in Harlem.  Sol Bloom also began building apartment houses.  Speculation was nothing new to Bloom and he considered his optioning the land between 31st and 33rd Streets west of Seventh Avenue in New York City his shrewdest real estate investment.  Indeed it was as Sol Bloom acquired most of the property that became New York’s Penn Station, making Bloom yet another fortune.

Bloom also made yet another change in his life, changing his party registration from Republican to Democrat and became allied with New York’s Tammany Hall.  Bloom’s new political party selected him as their candidate for Congress following the death of Congressman-elect Samuel Marx, who died before he could take office.  Bloom faced the Republican incumbent, Walter M. Chandler, and eked out a 145 vote victory.  Sol Bloom had been selected by Tammany Hall leaders for two important reasons: he was Jewish, which was quite helpful in a “silk stocking” district that had largely been represented by a Republican and he was wealthy enough to fund his own campaign.  Sol Bloom explained his selection by Tammany Hall to run for Congress, saying dryly, “I had been chosen to run because I was an amiable and solvent Jew.”

Bloom took the oath of office in 1923 and remained in Congress until his death in 1949.

As Isaiah Berlin pointed out in his report to the British Foreign Office, Sol Bloom was a Jew who was elected to Congress in a district which contained a large Jewish population as well as many other “foreign elements”, which affected how the new congressman saw foreign policy issues.  Berlin believed Sol Bloom was far more “Europe-conscious” than most of his colleagues precisely because he represented so many Jews and immigrants in the House of Representatives.  Berlin readily acknowledged Bloom was “strongly anti-Nazi” well before the United States entered World War II.  Berlin penned that Bloom was no intellectual, but rather an “easy-going, superficial, glad handish type.”  Isaiah Berlin also noted something that could be said of every congressman whose family had immigrated to America: Sol Bloom was “intensely patriotic” yet was no isolationist.  Berlin acknowledged Sol Bloom had done his utmost to help President Roosevelt overcome the strong isolationist sentiment in the Congress to steer the Lend Lease law through the House Foreign Affairs Committee, without which Great Britain might not have survived the German onslaught during World War II.  Passage of Lend Lease was quite an accomplishment and took the best efforts of President Franklin D. Roosevelt, Secretary of State Cordell Hull, and Chairman of the House Foreign Affairs Committee Sol Bloom.

If Sol Bloom was no intellectual powerhouse, he was fundamentally a kind man.  During the depths of the Great Depression, Bloom would walk up the steps of the Capitol Building every morning, casually dropping a flood of nickels, dimes, and pennies from his pockets for children to find.  William “Fishbait” Miller, longtime Doorkeeper of the House, watched Bloom’s daily ritual of coins flowing from his pockets, and asked the New York congressman what he was doing.  Sol Bloom hushed Miller, telling him, “Let the little children find them when they come to see the Capitol.  In this Depression, someone has to show them that good things can happen.”

While many, if not most, of his colleagues did not regard Sol Bloom as a particularly capable congressman, they readily accepted him as the director of the George Washington Bicentennial Commission in 1932.  Ever the showman, Bloom produced and directed a production that required a budget of $350,000 and a staff of 125.  Even Bloom’s critics were stunned when the New Yorker closed the show and turned over a million dollar profit to the government of the United States.  Bloom saw to it every school child in America was well acquainted with the country’s Founding Father.  In fact, Congressman Bloom oversaw the writing and publication of a book, The Story of the Constitution, a copy of which was given to every American child attending school in the United States free of charge.

Tennessean Sam D. McReynolds had been Chairman of the House Foreign Affairs Committee since 1933, when Democrats had retaken Congress with FDR’s landslide election as President of the United States.  McReynolds was well regarded, but was seriously ailing by the summer of 1939.  Sam McReynolds succumbed to heart disease on July 11, 1939; he was only sixty-seven years old.  Sixty-nine year old Sol Bloom assumed the chairmanship of the House Foreign Relations Committee and many observers in and out of Congress shuddered at the thought of the showman chairing a committee that was of vital importance as war seemed imminent in Europe.  It is likely difficult for many readers today to understand the power and influence of the isolationist bloc in Congress, which bridged both political parties.  Some of the most respected and influential members of Congress were isolationists; Senator Hiram W. Johnson of California, a progressive Republican, was a devout isolationist, as was his fellow progressive Republican William E. Borah.  Borah, perhaps the only orator in the United States Senate who could influence the votes of his colleagues through his speaking ability, scoffed at the idea war would break out in Europe despite all the signs easily observed by President Roosevelt and Secretary of State Hull.  David I. Walsh, a Democrat and the first Catholic governor and U. S. senator elected from Massachusetts, was the Chairman of the Senate Naval Affairs Committee, an Irishman who disliked the British Empire and represented the thinking of a majority of his constituents in his staunch isolationism.  Whether very liberal or deeply conservative, irrespective of political party, many members of Congress shared a very real fear of American involvement in foreign wars.  Senator Burton K. Wheeler of Montana, a Democrat and a progressive, like many Americans of his generation, rejected the notion cherished by the late President Woodrow Wilson; namely, that the First World War had been the war to end all future wars.  Instead, Wheeler believed the heavy reparations forced upon Germany had sowed the seeds of bitterness and economic ruin, which brought Adolf Hitler to power in 1933.  Wheeler also thought the First World War had merely reinforced British colonialism and imperialism.  Burton K. Wheeler, a shrewd and effective politician, became one of the leading congressional voices warning that President Roosevelt was inching ever closer to American involvement in the war that began raging in Europe in the fall of 1939.

Bloom was able enough as Chairman of the House Foreign Affairs Committee to earn the hatred of many isolationist interests for his part in Congress passing the Selective Service Act.  Protestors picketed Bloom’s home even as he was sitting shiva for his late wife and the New York congressman was routinely denounced as a “Jewish warmonger” by opponents and some isolationist newspapers.

Sol Bloom was one of the eight Americans attending the meeting of countries to write the charter of the United Nations in San Francisco in April of 1945.  Bloom was also the only Jewish member of the American delegation.  Bloom once again argued on behalf of refugees, but it was to no avail.  The true extent of the Holocaust was yet unknown and few remember the three committees in the U. S. House of Representatives charged with American foreign policy relating to Jewish immigration were Foreign Affairs, Immigration, and Judiciary.  Ironically, during much of the time the Jewish refugee crisis became acute, the chairs of those same committees were all Jewish.

Bloom was one of the first congressman (like Senator McKellar of Tennessee) to have a woman secretary, the equivalent to Chief of Staff today.  Mrs. Edna Epstein remembered Sol Bloom as an advocate of “the ‘little’ man” and one who “always did the small things that endeared him to people.”

Sol Bloom was seventy-eight years old when he suffered a fatal heart attack at Bethesda Naval Hospital on March 7, 1949, two days before his seventy-ninth birthday.  Speaker of the House Sam Rayburn, a master of the common-sense approach, paid Bloom a moving tribute when he said, “I think Sol Bloom was one of the finest men I ever knew and one of the best friends I ever had.  Everybody who loves a great soul will grieve at Sol Bloom’s passing.  He performed a great service to his state, his country and his generation.”

Bloom had entered Bethesda Naval Hospital three days earlier due to a persistent cold the elderly congressman could not seem to shake.  Bloom’s only child, Vera Tova Bloom, never married, but became one of Washington’s notable hostesses.  It is interesting to note Sol Bloom’s successor in Congress was no less than Franklin Delano Roosevelt, Jr.