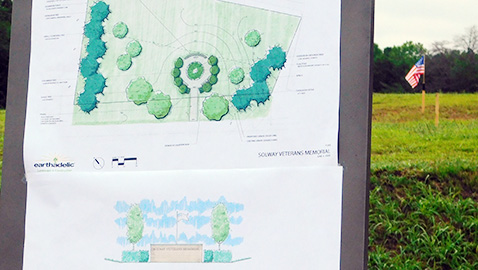 The construction of a new Veterans Memorial was announced Thursday morning at the Solway Baptist Church and the long-sought project had taken the efforts of many people, organizations and businesses.

The Solway Veterans Memorial will consist of a wall with all six military emblems emblazed on it. When the new Space Force emblem is available it will be added. A small walkway with a courtyard and benches and a plaque with contributor names will be placed on the site.

Construction may be completed in late fall and, when it’s safe for people to gather there, a military dedication ceremony will be held.

Jo Anne Lavender, president of the TVA Retirees Association Knoxville Chapter, spoke in the church parking lot just across Solway Ferry Road from where the monument will be located. Just beyond the road in the field was a small flag marking the spot, between the road and Oak Ridge Highway.

Lavender recognized many people who were involved in the effort and began with Reny McClain Lee, who became project manager after hatching the idea. Lee sought the help of State Representative Justin Lafferty, who attended the event. She also recognized Vickie Ellis, President of the TVA Retirement Association, Debbie and Mike Rutherford, Barbara Martocci, and Jay Armbruster.

Pastor Logan Parton of the Solway Church spoke briefly and said the church is proud to have donated the property, support the monument and manage the property.

“It’s a great honor to be part of the project, to give back to our community,” Parton said.