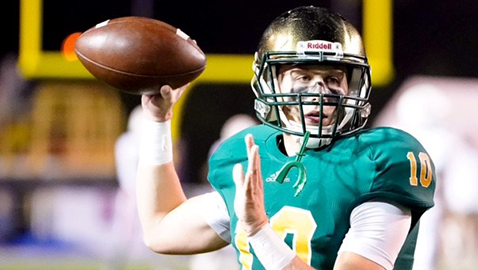 Jack Sompayrac can look back on his prep career with plenty of fond memories.

Knoxville Catholic’s Class 5A state championship in football highlighted his senior year and being named the Most Valuable Offensive Player in the 45-28 win over Beech was a bonus for Sompayrac, the quarterback of the Fighting Irish.

The 6-2, 195-pounder threw two touchdown passes and ran for two more in the title game at Tennessee Tech in Cookeville.

Sompayrac, who also stood out in basketball, is Catholic’s male Student-Athlete of the Year.

“Jack has been a tremendous leader for the Irish in both football and basketball,” said Athletic Director Jason Surlas. “He was a three-year starter in both sports, and has been instrumental in winning two state football titles, and reaching the state championship game in basketball.”

One of the area’s top long-range shooters as a junior, Sompayrac and the No. 1 ranked Irishmen won 28 straight games in their run to the Class AA finals, where they fell to Nashville Maplewood 60-57 at MTSU’s Murphy Center in Murfreesboro.

In his sophomore football season, Sompayrac, returning from a broken arm, joined other subs in finishing up Catholic’s 48-8 romp past Nashville Pearl-Cohn in the Class 4A title game.

“Jack took full advantage of every opportunity he had in his high school career, and his impact on our athletic program will be experienced for years to come,” added Surlas.

VANESSA BELANGER, named Catholic’s female Student-Athlete of the Year, was a four-year starter for the Lady Irish soccer team, and pivotal in the long standing success of the program, which included one state championship and many district and region titles, said Surlas.

“Vanessa proved to be a wonderful example of how to be a tremendous student in the classroom, a strong leader among her peers in the hallways, and an outstanding athlete on the field,” summed up the Catholic AD.