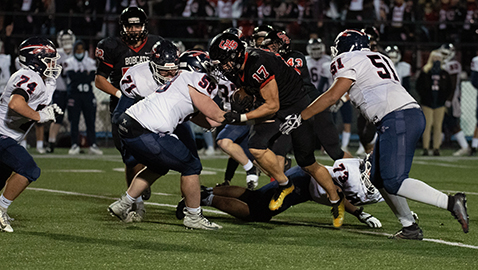 One of the goals for each and every high school football team is to practice on Thanksgiving.

The South-Doyle Cherokees have earned that right.

Shawn Gary scored three touchdowns, leading the Cherokees to a 21-14 win over the two-time defending state champion Central Bobcats in the Class 5A quarterfinals.

“It was a great game,” said South-Doyle head coach Clark Duncan. “We knew we needed to play with emotion and play with some discipline. We made fewer mistakes and found a way to win.”

The game could not have started any better for the visitors.  The opening kickoff went to Gary, who proceeded to hurdle and sprint 93 yards for a touchdown. Fifteen seconds in, the Cherokees were out in front 7-0.

South-Doyle’s next drive started with the deep ball. Nick Martin passed to Preston Sisler, who made a diving catch. The 39-yard connection moved the Cherokees down to the Central 30. Eventually, Gary took a direct snap and ran into the end zone from two yards out.  It was an 8 play, 69-yard drive, and the Cherokees were up 14-0.

It looked like Central (10-3) had chopped the lead in half when junior quarterback Ryan Bolton lofted a pass to a wide-open Kalib Fortner in the end zone. It would have been a 26-yard scoring hookup, but Bolton was ruled to have thrown the football a yard past the line of scrimmage, wiping the points off the scoreboard.

On the very next play, Lex Scott made an interception for the Cherokees, but a holding call kept the drive alive for Central.  Then Bolton threw down the field and Liam Fortner was there.  The 21-yard pass play made it a 14-7 game with 2:03 to go in the first quarter.

In the second quarter, the momentum stayed on the Bobcats’ side when Brody Cranford picked off Martin at South-Doyle’s 35. But the Cherokee defense stood tall, forcing Central to turn the football over on downs.

The Cherokees couldn’t pick up a first down and attempted to punt the football back to Central.  Ewan Johnson couldn’t handle the snap, and Brandon Ridner tackled him at the five-yard line.

But once again the South-Doyle (10-3) defense was up to the task. Liam Fortner took the direct snap, but Levi Herald collected the fumbled handoff attempt, giving the Cherokees the ball back at the 10-yard line.

Neither team could muster anything offensively the rest of the half, and it was 14-7, South-Doyle, at intermission.

Just as the Cherokees started the first half quickly, the Bobcats did the same in the second half.  It was a two play, 80-yard touchdown drive.  Bolton threw deep to Kalib Fortner for a 53-yard score. The second half was only 42 seconds old, and the game was now tied at 14.

Later in the third, Liam Fortner picked off Martin and returned it to the Cherokees’ 30. But yet again the South-Doyle defense wouldn’t allow the turnover to hurt them. A sack by Herald led to another turnover on downs.

“We played great defense,” said Duncan. “They gave up zero points on those stands, which was huge. They are growing and learning how to handle adversity. We preach about adversity all the time.  ‘Do you quit or realize, I gotta play harder now.’  Our team has grown beyond their years.”

On the final play of the third quarter, the Cherokees punted the football back to Central.  Jaden Horton tried to pick it up on a few hops, but it went off his hands and Cameron Monday fell on it at the Bobcat 29.

The ensuing short drive was dominated by Gary, who would take the direct snap and run it in from the 1. With 7:43 to go, the Cherokees were in the lead 21-14.

“He’s special,” Duncan said of Gary. “He has speed and vision. This week our staff put together that wildcat package. We were planning to use it only in the red zone, but we got in situations where we thought, ‘Let’s change it up,’ and we found it to be potent.”

Central moved the football into Cherokee territory. A sack by Tayshawn Patrick backed Central up to the 24. Central would face 4th-and-14.  The pass would fall incomplete and South-Doyle took over with 3:07 to go.

It was all Shawn Gary after that, taking each direct snap and running for two first downs to run out the clock.

“We talked about adversity and how we would handle it,” said Duncan. “We beat two really good teams in the playoffs (Daniel Boone and David Crockett). We were battle-tested and that built confidence.”

On Friday South-Doyle travels to historic Blankenship Field to play Oak Ridge. The winner will head to Cookeville a week later to play for the state championship.