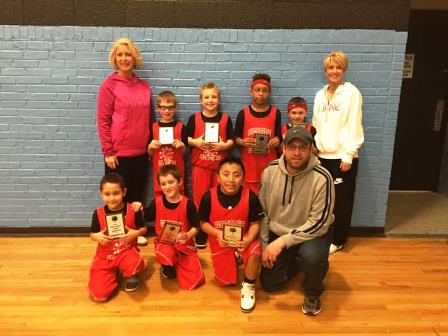 Teamwork and perseverance were among the lessons the South Doyle Jr. Pro 8 and Under Boys’ All-Stars Basketball Team learned in their march to second place in the Knox County 8 and Under Youth  Basketball Tournament, hosted by the Knox Co. Parks and Recreation Department.

“I think that’s the biggest thing they had to adjust to, trust their fellow players,” Head Coach April Bean said.

“These kids are competing against each other all year, and all of a sudden we’re putting them on the same team,” Bean said. “They had to learn to trust their fellow players,” she emphasized.

Rick Wood, South Doyle Junior Basketball League Commissioner, also mentioned teamwork as an essential skill.  “As they play in these elementary school leagues, they’re learning about teamwork and how to win,” he said.

Regarding perseverance, Bean said, “They never gave up. All I could do was tell them how proud I was. They showed up and they did it.”

With the second place finish to Powell on February 26, the South Doyle Jr. Pro 8 and Under All-Stars received a trophy plaque. Bean said the team had seven players representing South Knoxville, nearly all of them from Mt. Olive and one from New Hope Well School and consisted of second and third graders who were seven and eight years old.

The tournament was a double elimination tournament, and the team had to fight their way out of the Losers’ Bracket.

Prior to the Knox Co. Tournament, the boys played in the South Doyle Junior Basketball League during the regular season for their respective schools, which lasted from November to February, according to Wood. Following the players’ regular season, Bean conducted tryouts for the All-Star team.

“We had a tryout one weekend, and we ended up with seven players,” Bean said. “We had five practices together. We had the youngest team. I’m really proud of these kids,” Bean stressed.

Quarters in the tournament games were six minutes long, and the clock continuously ran except for injuries, timeouts, and the last two minutes of the second and fourth quarters.

Following their second place finish, the team had the opportunity to visit with University of Tennessee Head Basketball Coach Rick Barnes following the Vols’ home game against Arkansas on February  27. The youngsters also got to go into the locker room and have their pictures made with the basketball players.

Bean set up the session with Barnes. “I contacted his secretary and she got back in touch with us. She said I can get you guys in free.”

Bean mentioned that during the UT game, she talked to the players about never giving up and pointed out how the UT players kept competing, even though they were down by more than 20 points. “I wanted to show them, hey guys, we never quit,” she stressed.

“It opened doors for these young kids,” Bean said of the tournament. “They bought in so easily. It was a really good bonding experience.”