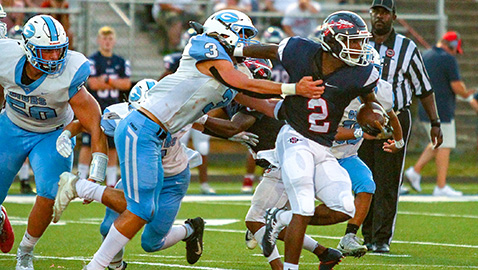 South-Doyle kept piling up the points in the second half Friday night, but uncertainty and sadness still weighed heavily on the unbeaten football team and its fans.

The Cherokees had lost a team leader and their veteran quarterback.

Mason Brang suffered a serious injury to his left leg when tackled at the Gibbs’ 4-yardline near the Eagles’ sideline with 1:50 remaining in the second quarter.

Mason moaned in pain as medical personnel attended to him and Head Coach Clark Duncan bent over his senior field general.

After several minutes, Brang was helped up to be taken back across the field. He wasn’t putting any weight on his injured leg. A repeated chant of “Mason Brang, Mason Brang” from students and fans in the South-Doyle bleachers across the way could be heard all over Billy K. Nicely Stadium.

Sophomore Nick Martin came in at quarterback and two plays later Elijah Young scored his fourth touchdown of the game to boost the Cherokees’ lead to 31-10.

South-Doyle scored 31 more points in the second half for a 62-17 victory, but many still left wondering if their team, which has become regarded as a Class 5A state title contender, could overcome the night’s adversity in upcoming games down the road.

It was a great win, but it had to be bittersweet.

“Yeah, you know, it was a great win,” said Coach Duncan in a post-game interview on the field. “Mason Brang is a huge part of our program, not just being a three-year starter, but he’s such a leader by action and our kids love him.”

Coach Duncan was visibly hurt and concerned about Brang’s injury, but also remained optimistic about the season ahead.

“It (the injury) is pretty extensive,” he said. “It could be six to eight weeks or it could be a season-ending (injury) … You hate it for not our wins and losses or what might come, you just hate it for the young man who has worked so hard, prepared himself and has a chance to go and play at the next level.

“He’s a strong character Christian guy and he’ll figure it out and bounce back from it and we will too. We’ll just have to regroup and I think Nick Martin is a very capable young man that’s going to (shine) really bright for our program.”

Martin admitted he was a little nervous when he first came into the game, but the 6-2, 165-pounder settled down and played well after intermission.

“You always hear the next man up,” said Martin. “I’m going to miss Mason personally too. All the team will. We just got to get to practice and get better and better. I don’t know if he can get back, but hopefully he can get back as soon as possible.”

Gibbs jumped out to a 7-0 lead on the game’s first play from scrimmage – an 80-yard run by quarterback Troy Davis. A 27-yard field goal by Ewan Johnson cut the Eagles’ fast start to 7-3.

Young’s TD run from the 2 and Johnson’s first of six PATs put South-Doyle ahead 10-7 with 59 seconds left in the opening quarter.

Gibbs tied the score with a 35-yard field goal by John-Aidan Pittman with 8:29 to go in the half.

But Young put the Cherokees on top for good with a two-yard plunge on their next possession.

South-Doyle’s super quick running back, a Missouri commit, would go on to finish with six touchdowns in the game, raising his three-game season total to 12.

Young broke tackles on a 33-yard scoring scamper midway through the third quarter to make it 38-10.

Ethan Humphries bulled into the end zone from 15 yards out for Gibbs’ final score, cutting the deficit to 38-17.

Johnson kicked his second field goal – a 34-yarder – to make it 41-17 and the Cherokees finished the third quarter with a defensive stand led by Levi Herold, Michael Potter and Noah Myers that stopped the Eagles three straight plays from the 2-yardline.

Martin, who completed 7 of 10 passes for 99 yards in the second half, hit Nate Adebayo on a crossing pattern for a 31-yard touchdown to complete South-Doyle’s ensuing 98-yard drive.

Myers, a junior linebacker, recovered a Gibbs fumble and then got into the scoring parade himself with a 16-yard TD run. That made it 55-17 and set off the mercy rule’s running clock.

Following Dalyn Swaggerty’s fumble recovery on Gibbs’ kickoff return, freshman Tajuan Owens added the final TD with a run from the 1 with 4:40 to go.

“We came out strong,” said Gibbs Coach Brad Turner. “We just can’t make turnovers. Turnovers were the key. I think we had five or six. And a team like that, you can’t give them possessions.”

Turner was most impressed by South-Doyle’s overall athleticism. “They play together, they play hard and they believe in what they’re doing. Elijah Young is probably the best I’ve seen in 20 years of coaching. He runs with purpose.”

“I don’t know if it’s a record, but I’ve never coached anyone that scored six in one night,” said Duncan.

SATURDAY UPDATE: “Mason is doing well,” said Coach Duncan. “Still being evaluated, going to be a multiple week recovery, but hope to have him back before the end of the season.

“He’s a great young man and is going to be fine. He has a lot of family and friends that love and care about him.”