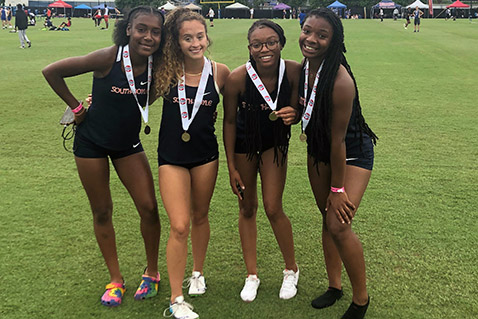 South-Doyle High School celebrated an accomplishment in girls track and field last week that took longer to achieve than the Spring Fling has been in existence.

For the first time ever, the Lady Cherokees captured a state championship in that sport, winning the 4×100 relay at Spring Fling XXIX Tuesday (May 24) in Murfreesboro.

“It was the first time in 30 years (when the school opened in 1991-92) that we had won an event in a state track meet,” said Head Coach Don Madgett. “I was really proud of them and the way they have worked all year and stayed focused.”

All the South-Doyle track coaches, including those on the boys’ side, were excited about the state title just as the girls themselves were. In addition to Madgett, that included Rick Wood, the boys head coach, plus Bobby Graham and Katherine Setliff who are assistant coaches for both teams.

“At some point in the mid-season, they had the fastest time in the state,” noted Madgett, “and we were able to convince them we really had a chance at this. It became more real when internet databases allowed us to see how things were going across the state.”

Madgett also said when Ripley’s team produced a faster time in the sectionals, it made the Lady Cherokees the No. 2 seed coming in and “underdogs” with the chance to pull off an “upset.”

Still, the win didn’t come easily and one never knows just how a relay team is going to react when it gets on the big stage at a state meet, particularly when the foursome includes a freshman and two sophomores.

Graham, the South-Doyle sprinter coach, had his hands full settling some nerves before the team stepped on the track at Middle Tennessee State University for its TSSAA Class AA championship race.

And his most nervous runner was his senior, Abby Sharpe, who would be running the third leg.

“Abby normally was the one who held the girls together,” pointed out Graham. “I said ‘Abby, What’s wrong?’ She said, ‘Coach, I’m so nervous.’

“Being a senior, she knew this would be her last shot at it,” added Graham. “The others, they didn’t know any better. They were just going to go out and run.”

Graham emphasized the importance of being relaxed to his team.

“No matter what happens just have fun,” he told them. “Trust each other. We’re going to do well if we just go out and execute. Just RELAX – that’s what I kept trying to tell them – relax, because the nervousness in my book was going to cause us to have bad handoffs. And I told them the only way I could see us getting beat is if we have bad handoffs.”

By the time the girls got to the track, they were calmed down, said Graham. “They prayed together before they went out. They’ve been doing that the past month of the season, praying together before each race and that seems to calm all the girls down.”

The freshman, Lariah Cozart, got off to a great start out of the blocks and was the first in the race to hand off the baton.

Coach Graham noticed some teams had put their better runners in the second leg of the race, but sophomore Amani Martin and Sharpe held them off. When sophomore anchor Ka’Shauna Dyer got “the stick,” said Graham, “we were a little ahead. She was the first to get the stick and once that happened I knew we had a really good chance.”

The finish was extremely close. The Lady Cherokees were clocked in 50.88 seconds and runner-up Ripley in 50.92.

With three talented youngsters returning, the goal will be to repeat next season, said Graham, but “we have to find someone to replace the leadership that we’re losing from Abby.”

The hope is a leader will emerge and pull the newcomers along and “we’ll find a girl or two that will help us get back to the state,” said Graham.

But there’s no hurry for that to happen right away. Instead, South-Doyle is enjoying and savoring a special victory.