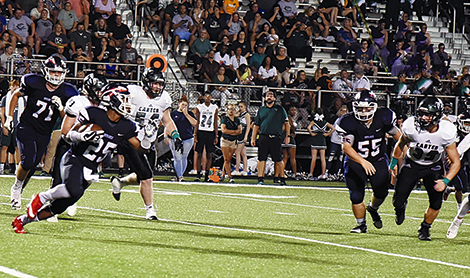 South-Doyle fans’ view of their team’s sideline wasn’t a pretty sight. The Cherokees’ Elijah Young, one of the state’s top running backs, was nursing “bumps and bruises” and not in uniform.

The scene on the field also was causing some worry. Visiting Carter was playing like it had an upset win in its plans and led at halftime.

But that changed in the second half.

Nate Adebayo and Ezra Young picked up the slack in Elijah’s absence and joined wide receiver Ton’Quez Ball and quarterback Mason Brang in leading South-Doyle past the Hornets 35-13 Friday night at Billy K. Nicely Stadium in a Region 2-5A matchup.

“We said at halftime they’ve got to come out and play as they have been coached and have practiced,” said South-Doyle Head Coach Clark Duncan. “If you do that, we’ll come back in the dressing room happy. And they did do that.”

Trailing 13-7, Ball hauled in a pass from Brang, broke two tackles and raced to the end zone to complete a 44-yard scoring play to get South-Doyle rolling in the third quarter. Luke Lynn’s extra-point kick put the Cherokees ahead 14-13.

Brang faked a handoff to the right and reversed back to the left to score on a 7-yard bootleg that extended the lead to 21-13 with 9:04 showing in the fourth quarter.

Two passes over the middle – a 29-yarder to Lex Scott and an 11-yarder to Farrell Scott – had set up the score.

With the Cherokees’ defense continuing to hold Carter in check in the second half, Ezra Young returned a punt 45 yards to the Hornets’ 3-yard line to put South-Doyle in position to break the game open. Santana Curtis rushed in for the touchdown on the next play and Lynn’s PAT made it 28-13.

Wide open in the end zone, Ezra Young hauled in a 19-yard pass from Brang to complete the scoring with 1:55 remaining.

After Lynn misfired on a 44-yard field goal attempt in the second quarter, Carter quarterback Jonathan Rynes led a drive to the Hornets’ 42. Facing a fourth-and-one, Carter went for it, but Rynes was tackled for a one-yard loss.

South-Doyle capitalized on the field position. Adebayo used a nifty spin move to score from 13 yards out for the Cherokees’ only touchdown in the first half.

Small but tough Quez Witherspoon got away for a 30-yard touchdown as Carter regained the lead 13-7 lead with 12.9 seconds left in the half. Witherspoon’s TD capped the 96-yard march that was aided by an unsportsmanlike conduct penalty and defensive holding foul on the Cherokees. Cox also had a 17-yard run in the drive.

Carter didn’t threaten in the second half, getting no closer than the South-Doyle 45-yard line against the Cherokees’ defense.

“Carter came out and played hard and we struggled and that was partly them and partly us,” said Coach Duncan. “But we just kept fighting and we needed this. We needed some adversity. We found adversity two weeks ago and didn’t respond to it. Tonight we did and that was huge for us. It will help us down the road.”

Vic Wharton, Carter’s interim head coach, said the “primary focus” has to be on playing four quarters and finishing.

The Hornets host Fulton Friday, while South-Doyle will entertain Seymour in its homecoming game.