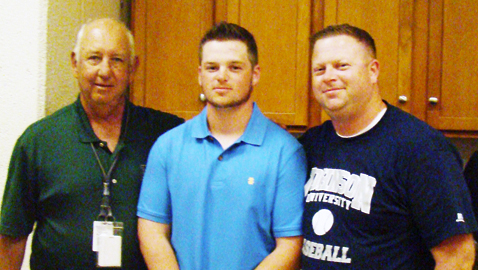 South-Doyle third baseman Matt Storm will continue to play baseball in college and he will attend Johnson University.

He made that official when he recently signed a National Letter of Intent to play for the Royals.

Storm signed at a ceremony on Monday, March 1 while family, friends and teammates were present. Several Johnson University players and coaches were also in attendance.

Storm is a second-generation baseball player for the Cherokees. He and his father, Matt, both played for longtime South-Doyle coach Robby Howard.

The elder Storm graduated from the school in 1997.

The younger Storm said that he chose Johnson because of the small classes, and Christian environment. He also wanted to stay close to home.

“I liked the small college and the Christian values at the school are important,” he said. “I also really wanted to stay close to home.

“I have some friends that I played with playing there. They played with me on some of my summer teams.”

Storm said he will pursue a degree in Physical Education. He aspires to be a high school teacher and coach and cites Howard as the key influence in his desire to work in education.