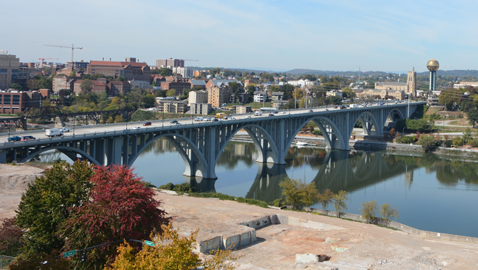 South Knoxville’s link with “downtown” Knoxville is the Henley Street Bridge and that entrance to the south is slowly getting a huge improvement. Although many businesses suffered when the bridge was closed for construction a few years ago, the area seems to be rebounding now. The stretch of Chapman Highway from the bridge to Seymour is now as busy as usual, if not more so. As you cross the bridge you can’t help but notice the changes at the former Baptist Hospital complex. You may also notice that the former Kern’s Bakery Building looks a little different.

There are several meetings and events this week for the public that deal with the changes south of the river.

The public is being invited to the Kern’s Bakery Building, 2110 Chapman Highway, today at 5:30 to discuss the Fort Dickerson Park and quarry lake improvements. The city, Legacy Parks Foundation, Aslan Foundation and Sanders Pace Architecture are sponsoring the event along with PORT Urbanism. Input from citizens for Phase One at the park and quarry lake improvements is being sought.

The city plans to use input from the meeting in possible future recreation programming at the lake and how the city will create access to the lake. The public is also being invited to tour the Kern’s building, renovated by private developers.

On Thursday the public can get an update on the South Waterfront Form Based Code. A meeting is planned at South Knoxville Elementary School, 801 Sevier Avenue, at 7 p.m.

Adopted originally in 2007 the Form Based Code has been periodically updated and proposed changes are being described as “legal housekeeping” to eliminate conflicts with other sections of the City Code.

Starting at 6 p.m. in the former chapel of the church at 3706 Sevier Heights Road in South Knoxville the meeting will deal with a request for a zoning change, from R-1 (Residential) to C-3 (Commercial) and the Sector Plan would be changed.

The Metropolitan Planning Commission was scheduled to hear the request for the changes earlier this month but the developer asked for a postponement to hear from the neighborhood. Anyone interested in getting more information can contact Linda Rust, neighborhood president, at 865-679-9924.

South Knox County is getting a very special academy. The Shangri-La Therapeutic Academy of Riding (STAR) of Lenoir City has been gifted a 47 -acre site at 3312 Tipton Station Road. The academy specializes in providing horseback riding for people with special needs.

On Wednesday STAR will open its Knox County facility, its second location in East Tennessee, and give the community an update on its programs and new volunteer opportunities. STAR has been changing lives for 29 years. STAR’s South Knox County location will also feature, that day, an antique and furniture sale.

Anyone interested in the event or to get more information about STAR can contact Lynn K. Petr, Executive Director, at 865-660-6280.