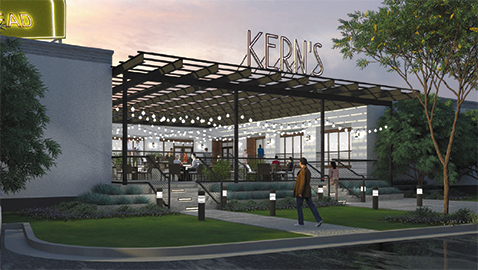 “You guys are riding a wave. You couldn’t be in a better place,” said the developer of the former Kern’s Bakery on Chapman Highway. He was speaking to the South Knoxville Alliance last week in their monthly meeting being held at Dogwood Elementary School.

Oliver Smith told the gathering that the development of the historic building and the acreage around it will have several restaurants, apartments, and 500 parking spaces. He said that the construction going on at the former Baptist Hospital site near the former bakery has seen the Conley Building there in progress of becoming an Embassy Suites. The Regal move to the hospital site, and the development along Sevier Avenue is luring people and businesses to South Knoxville.

He said the Kern’s complex will have five restaurants, one retail store, and multi-family housing in the back.

“People are gravitating to this area. Students and hipsters are coming across the river,” he said.

Smith said that multi-family developments, mom and pop stores and eventually “big box store” will located in South Knoxville. He said that the Kern’s property will link up to walking and biking trails being planned and that plans for historic Fort Stanley, just behind the Kern’s building, will add to the appeal of drawing people.

He hinted of the companies who are interested in locating within the Kern’s complex including a unique full-service restaurant.

“We want to work with the community,” he said.

Smith said the initial opening of the new Kern’s facility is nine to twelve months away. Within the next few years business development will begin pushing down Chapman Highway and Smith said he’s dreaming of someday having a light rail system serving the South Knoxville Waterfront and the UT Campus.

“We don’t know how long that might be but we’re putting it in the city’s ear,” he said. He said that urban Knoxville is being seen by younger residents as a “hip place to live.”

Also speaking at the meeting was Joseph Dudeck, a 53-year tax expert with H&R Block. He and Deborah Belford of H&R Block were highlight speakers and talked about tax tips suggestions for the upcoming tax season.

SKA members are being asked to do a marketing survey about their advertising.

The SKA is made up of business and professionals and sees itself as the South Knoxville Chamber, acting as the voice of the community with city and county officials. The organization meets monthly on the third Monday at various places.