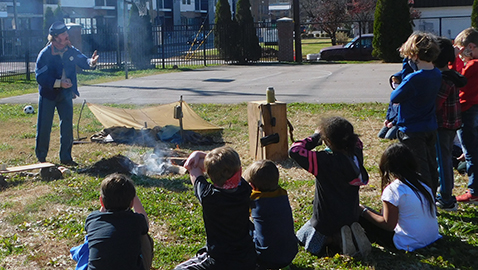 The air smelled of smoke on a clear day early last week as history came to life for the students of South Knoxville Elementary School with “History Over an Open Fire.”

The lunchtime program was made possible by Held Law Firm, the Mabry-Hazen House and Blount Mansion on Monday, November 23. The cooking demonstration went well into the afternoon as students went back in time to the period of the American Revolution and the Civil War.

The cooking demonstrations were done by Gordon Sisk, a retired high school history teacher who spent his career in classrooms at Central and Karns high schools, and Patrick Hollis, executive director of the Mabry-Hazen House.

The demonstration is the first of several scheduled programs to be held at South Knoxville Elementary this academic year.

“We’re going to have something every month until May,” South Knoxville Principal Tana Nicely said. “Hopefully, this pandemic will go away and our students will be able to march in the (June) parade to mark the 225th anniversary of our state ratification.”

Sisk and Hollis demonstrated their techniques to small gatherings of students. Sisk was in colonial attire and Hollis was dressed as a Union Army Soldier.

For Sisk, last week’s program was a labor of love.

“I first started doing this when I was teaching history at Central High School and then I did it for Karns for a while,” he said. “Since I’ve retired, I do this as part of the Over Mountain Victory Trail Association.

Sisk has a passion for American History but his favorite part of these gatherings is bringing our heritage to life for elementary school students.

“I love doing this for the little kids,” he said. “It’s fun and these kids are the future leaders of our nation.”

Hollis also relishes the opportunity to bring American history alive for the students of Knox County.

“This is an opportunity to help install a sense of history,” Hollis said. “History is taught and learned with all five senses.”

Students had the chance to sample food and were also given ingredients for a recipe to take home to share with their families.

Other events slated for South Knoxville Elementary School include a book drive, a candle making demonstration, a sewing demonstration, a program on other cultures in East Tennessee, a farm day and a game day. All events will be conducted from an 18th-century perspective.