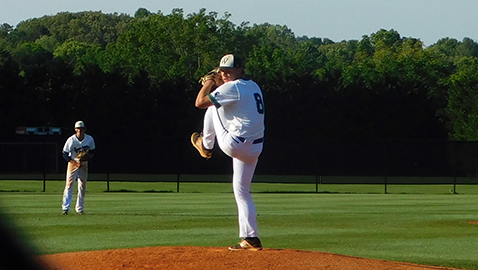 Webb pitcher Peter Shaefer delivers a pitch in a Division II-A State VIII Playoff Game. Shaefer had 14 strikeouts but the Spartans dropped  a 1-0 nine-inning decision to Clarksville Academy. The Cougars went on to sweep a double header and punch their ticket to Murfreesboro while eliminating the Spartans. Photo by Ken Lay.

A long night on the diamond ended on a sour note for the Webb School of Knoxville baseball team.

For the second consecutive year, the Spartans reached the State VIII and played at home and for a second straight season, they were ousted after defeating rival Christian Academy of Knoxville.

The Cougars (26-13) opened the night with a 1-0 nine-inning victory. They won that game when the Spartans committed an error in the top of the ninth inning.

Webb couldn’t score in the bottom of the frame.

Riley George opened the frame with a leadoff walk and took second on a balk by Clarksville Academy starting pitcher Shawn Scott. Baker Wooten followed with a single and George advanced to third.

George would come home when Scott uncorked a wild pitch. Scott, however, would limit the damage when he struck out the side.

The Cougars would pull even in the bottom of the inning when Isaac German scored on a fielder’s choice by Ty Teasley after being hit by a pitch earlier in the frame.

The Spartans took a 2-1 lead in the top of the fourth when Julian Mays scored on a wild pitch.

Webb retained the upper hand until things came unraveled in the bottom of the sixth.

The Cougars, with some timely hitting and some help from a generous Spartans defense, scored seven runs and pounded out six hits in the frame.

Ty Turner had a two-run double, Nathan Oshoney added a two-run homer and Bryce Robinson knocked in another run with a double to put the game out of reach. Clarksville Academy scored its other run in the inning when a third strike eluded catcher Graham Lischer in a nightmarish inning for the Spartans, who went quietly in the seventh inning.

For Webb starting pitcher Mason Patel, a junior, it was a bitter-sweet night as Webb’s season came to an end.

“This sucks,” he said. “For two years, we’ve watched teams celebrate on our field. We just didn’t have our best day.

“But if you look at the improvements we made, it’s been a good year. If you saw us at the beginning of the year, all the coaches that saw us probably said that we didn’t have anything and they thought that we weren’t going to go anywhere. We’re young and we’re going to come back better next year and we’re going to be hungry.”

“I hate these talks,” Wormsley said after the double header. “But nobody expected us to win our region against CAK and get here. I’m proud of my kids because they’ve battled hard all year.

In the first game against the Cougars, Peter Shaefer, a senior and Johns Hopkins signee, had 14 strikeouts. He was, however, tagged with a hard-luck loss in a complete game performance.