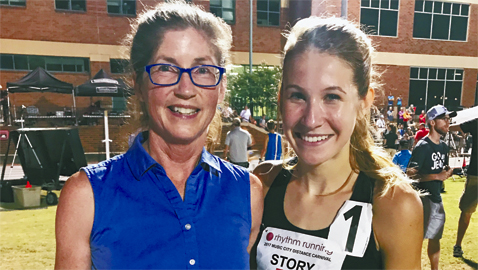 Rebecca Story has broken the TSSAA’s oldest girls track record. And what’s really neat is Margaret Groos Sloan, the former record holder, was on hand to cheer her on.

Story bettered the 40-year-old record for the 1600-meter run when she won the high school girls’ 1-mile Elite division race in 4:45.63 in the Music City Distance Carnival at the Vanderbilt track and field complex June 10. Her time converted to a 4:43.97 for the 1600.

“Margaret Groos Sloan was really nice,” said Story via e-mail to the Focus. “She is from Franklin and ran for University of Virginia. She said she noticed I ran a 4:48 1600 at KIL mid-season and so she knew I could possibly break her record from 1977 this year. She was super nice and cheering for me to break the record. She is training to run the Masters mile this year.”

The 57-year-old Sloan was born in Nashville. She won the Pittsburgh Marathon in 1988.

Story, who will be starting her senior year in August at Christian Academy of Knoxville, said it was “a fun June.” A week earlier on June 3 she “PRd” in the 800 at the Tony Parilla Thrilla time trial at Knoxville Catholic, posting a 2:12.51.

That was her first race since running the anchor leg on CAK’s victorious 4×800 relay and sweeping the 1600, 800 and 3200 runs at the TSSAA state meet in Murfreesboro in May.

Not all went well, however, in June for the CAK star runner. Story was also invited to run at the Brooks PR Invitational this year in Seattle on June 17.

“They asked the top two-milers in the country to run,” e-mailed Story. “I came in 12th. I was really disappointed because I was planning to break 10 (minutes) again, but I had a really bad race – my legs just wouldn’t move. I don’t have an excuse. I guess that happens sometimes.”

She will have an opportunity to bounce back later this month, as she has been invited to the Nike Elite Camp in Portland, Ore., July 19-23, when the Top 10 girls’ and boys’ distance runners in the country compete.

After that, Rebecca said she will be “looking forward to a super senior year!”