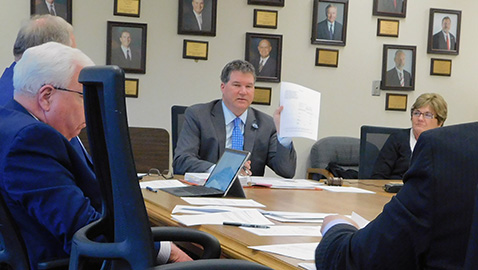 It is true, some meetings of the Knox County Commission seem to go on forever. The sessions, which start at 5 p.m. have been known to stretch out five and six hours.

In order to speed things up, the Commission’s Rules Committee, chaired by Larsen Jay, is proposing some agenda changes that might help. One of those changes involve tweaking the public forum and moving a few things around on the agenda.

The following proposed changes will need to be approved during next month’s commission meeting.

Honor Resolutions, those matters that recognize individuals or organizations, may be moved to immediately follow the Pledge of Allegiance to the Flag. That could free up the honored group, individual or organization from having to sit through other agenda items.

Public Forum, where any citizen may address the meeting, could be altered as well, allowing people who want to speak on specific agenda items an opportunity to do so after the Honor Resolutions at the beginning of the meeting or when their topic comes up on the agenda.

Individuals who want to speak on non-agenda “open topics” may do so near the end of a commission meeting.

One proposed change to the order of agenda items calls for non-controversial items or the school board requests that must be approved by law to be moved to near the end of a commission regular meeting.

The Rules Committee saw several suggestions withdrawn including granting rezoning requests up to 60 days if the applicant isn’t present and, if the applicant doesn’t appear in the second session denying the request. The committee was told that state law does not require an applicant to be present but the commission sets the rule requiring an appearance.

Jay suggested that the reading of all the school board’s budget requests be stopped but pulled the idea. Law Director Richard (Bud) Armstrong noted that state law requires the verbal reading of the requests.

An idea of having a reorganization meeting following a commission election and doing so by September 1st was also pulled. Commissioner Brad Anders said the reorganization, which selects the chair and vice chair, traditionally is held on the day of the oaths.

Commissioner Charles Busler’s idea to have emergency meetings called by the chair, not the mayor, fell flat. Busler said the charter requires the chair to set an agenda and noted that the commission and the mayor’s office are separate entities. Jay responded saying, “You’re taking a leg off the stool” by removing the mayor’s power to call such a meeting.

“We’re letting someone else set our agenda for us,” Busler responded. His idea failed in a 3-1 vote.