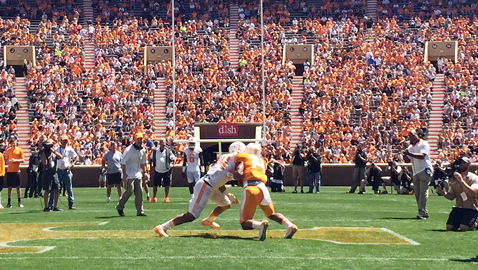 On Saturday, April 16th, Tennessee concluded spring practice with the annual Orange & White Game.  The Orange defeated the White 70-63 with a scoring system even the brightest minds at M.I.T. could not master.

Many of the announced crowd of more than 67,000 left Neyland Stadium already thinking about the season opener on September 3rd against Appalachian State.

For the Vols?  There’s a lot of work to be done before then.

“The next three months are going to be extremely, extremely critical in the development of this football team,” said Tennessee head coach Butch Jones. “We have to get stronger. We have to work on our football endurance. We have to get in football condition. We have to continue to elevate our play at every single position, develop depth, and then we’ll have our recruiting class coming in here too. So, the competition should be ramped up even that much more.”

Spring practice was a challenge for Jones and the rest of the coaching staff.   More than 20 players missed the Orange & White Game due to injury.

“In years past, we would have had to cancel the spring game,” said Jones.  “A lot of those were pre-existing injuries from the fall, and we held individuals out that maybe could have possibly played, but we didn’t want to risk anything.  Yeah, we’re not an older, veteran group, but you never assume anything. That’s why the leadership… that’s why the captains, all are really important. This football team has been pretty focused all spring.”

This upcoming season will be one of the most highly anticipated in Tennessee football history.  After nearly a decade in the abyss, the Vols appear ready to win the SEC East, and earn a trip to Atlanta in the SEC championship game.  That would put the Vols in position to advance to the College Football Playoff.

“It’s been fun to see it all grow. I came in as soon as Coach (Butch) Jones got here,” said Tennessee senior linebacker Jalen Reeves-Maybin.  I was an early-enrollee. Just to see us take that climb from the bottom of the SEC to where we are now and have the expectations placed on us now… it’s been a fun process. I want to take us as high as we can go.”

“We have our own expectations and how we expect to play every time we step on the field,” said Tennessee senior quarterback Josh Dobbs. “We understand we have a lot of talent on this team. The goal for us is to take it day-by-day, focus on the process. Embrace the grind, especially during the summer to get ready for fall camp. We understand every time we step on the field, we’re working to win. That’s our mindset entering the fall.”

“We’re focused on the process more than the end goals. We can’t just talk about winning the title because that doesn’t happen if… we don’t have a great transition into our summer program,” said Tennessee sophomore defensive tackle Kahlil McKenzie. “It goes from the summer program, training camp to having a great season. We have to take it game by game and phase by phase. We have to have a great summer, great camp, and all of the rest will take care of itself.”

“We don’t concern ourselves with hype and expectations,” said Jones. “I mean, that’s what you want, that’s why you come to Tennessee, but it’s focusing on the process of being a football player and a better football team every single day. The minute you get caught up and worried about that, you’re going down the wrong path. You always have goals, but really, quite simply it’s to be the best that you can possibly be. It’s getting the most out of your talents. It’s us as coaches getting the most of our players.”

The Vols have built depth.  They return as many as 18 starters.

For lack of a better cliché… the time is now.

See you in September…