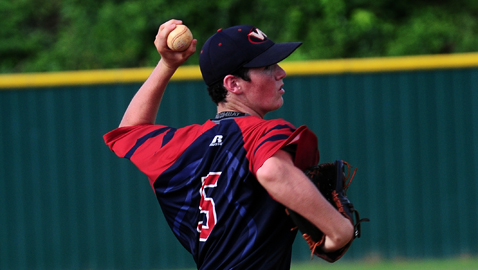 West’s Sam Springer delivers a pitch in the 2014 season. The Rebels’ left-hander had a strong summer on the mound last year and has been recognized as a NABF preseason high school All-American.

Sam Springer had a baseball summer to remember in 2014.

The National Amateur Baseball Federation recognized it too by naming the West pitcher to its 2015 high school preseason All-America team.

Springer, a left-hander who will be a junior for the Rebels this spring, was one of 25 players across the country to be honored on the first team.

The NABF’s first-team and second-team recognizes players from the United States who have played in NABF leagues, tournaments and World Series events. The teams consists of players who are currently sseniors, juniors or sophomores in high school. There is also a preseason honorable mention list to identify other potential top underclassmen.

Biographical thumbnail sketches were presented on the NABF website on each first-team honoree. The bio on Springer said:

“This DI recruit had a big summer. In the NABF High School Division (17U) World Series (held in Knoxville), he pitched a 1-0 complete game shutout, striking out 11. At the Mississippi NABF Classic, he pitched 5 2/3 innings, striking out 9 against fellow All-American Zac Watson. In the Perfect Game East Cobb Showcase, he got a 5-inning complete victory, striking out 10. Springer picked off 19 runners in 2014, proving he has one of the best moves in the country.”

West Coach Buzz McNish says Springer should be his team’s No. 1 pitcher this year.

“Sam has started for us since his freshman year,” stated McNish via e-mail. “The All-America selection is a tremendous honor for Sam and our program. When you look at the list and see the caliber of players that he is grouped with, it is very impressive.

“Sam received a lot of attention through the summer because of his performance in big tournaments that we attended. We actually faced seven of the players that are part of the All-American team through the course of the summer, so it was great exposure for our team and Sam. He made the most of those opportunities. We are really excited for him and our team.”

Springer, listed as a 5-11, 175-pounder who also can play first base, was asked if the All-America recognition will motivate him more in his baseball career and/or add pressure.

“This honor definitely motivates me to continue my baseball career and work hard to reach and compete at the next level,” he replied. “As for the pressure, it has not really put any on me. I’ve continued to work hard and I’m excited to prove myself when the season begins. I love pressure when I’m on the mound pitching. It’s when I play my best.”

Springer added: “My goal for the season is to put the team in the best position to win every time I step out on the field in all aspects of the game.

“Our team goal is at least 20 wins. Twenty wins would make us the winningest team in West High School history. Of course, we are going to work hard to exceed this goal during the upcoming season.”

Sevier County High pitcher Zach Linginfelter, who has committed to the University of Tennessee, was the only other Tennessean named to the first-team.

Adam Cupp, a sophomore middle infielder for West, was among 20 players who received honorable mention.