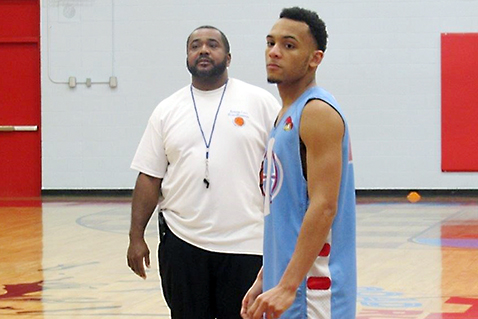 “My daughter is going off to college and we’re going to try and see her as often as we can,” said Stanton Friday. “That’s not something we would be able to do, if I were still coaching basketball. And plus it was just time to move on from Austin-East. I’ve been there 15 years (including six years as an assistant coach).

“It’s time to do something different; try to spend a little mort time with the family and stuff like that.”

Stanton’s daughter Sidnee will be going to Tennessee Tech University in Cookeville on a track and field scholarship.

Stanton already has taken a teaching job at Hardin Valley Academy and will continue to teach History. He and his family live just a little over five minutes from HVA.

Stanton coached as an assistant for six seasons under former A-E head coach Charles Mitchell and was promoted to head coach in July of 2013.

“The year before that (2018) was probably the best team I ever had and we were ranked No. 2 in the state,” said Stanton, but his team and Chattanooga Brainerd were banned from post-season play after an altercation between their two teams occurred in a game at Brainerd that January. Fans also reportedly came out onto the court, making the situation worse.

The TSSAA later reduced the schools’ two-year suspension to one year, which allowed both teams to reach the state tourney in 2019.

This past season, A-E (9-15) made it to the new Class 3A sectional round before being eliminated at Stone Memorial.

“We had a horrible start to the season as we didn’t get to practice,” said Stanton. “Our floor was being redone. We went the first four or five games without practicing.”

Chris Kesler is considered a top candidate to fill the Austin-East vacancy. Kesler had assisted Stanton the past two seasons, after having been head coach at West High for several years.

Stanton said Kesler has been taking the Austin-East team to summer camps.