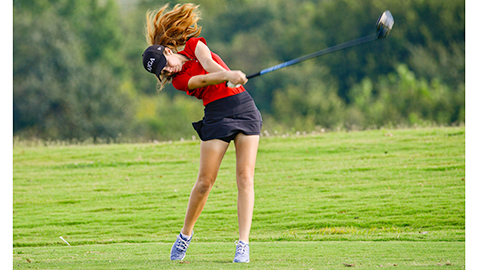 Alyssa Montgomery was a picture of consistency in golf throughout her high school career at Central and is the female Student-Athlete of the Year for 2018-19.

The Virginia Tech signee capped her highly successful run with a round of 70 and a third place finish in the TSSAA Large Class state tournament, which was shortened to 18 holes at Willowbrook Golf Club in Manchester because of inclement weather.

It was her fourth straight trip to the state, where she had placed sixth, fifth and seventh in her first three years.

Montgomery made her mark quickly in the Region 2 tournament, posting a record 65 her freshman year, and then went on to become a four-time Region 2 champion – the first time a boy or girl had accomplished such a feat, according to Central Coach Tony Patterson.

Alyssa won the District 3 crown three times, and after not winning as a sophomore, she bounced back to capture All-State honors for the first time with her fifth place showing at state. The following season, she won the district tourney with a scoring record 68.

In all, she captured 10 individual titles in high school tourneys and improved her distance hitting the ball by 15 to 20 yards by the time she was a senior.

Patterson, who stepped down from his coaching post after 15 years at the end of the season, called Montgomery “a cerebral golfer” and praised her consistency.

Alyssa drew national attention the spring of her freshman year when she won the girls’ age 14-15 division of the Drive, Chip and Putt National Finals, which was played at the historic Augusta National Golf Club, home of the Masters.

In addition to golf, Alyssa earned the Careacter Star Athlete award as a member of the Lady Bobcats’ bowling team and also was on the school’s Robotics team.

She hopes to major in environmental engineering.