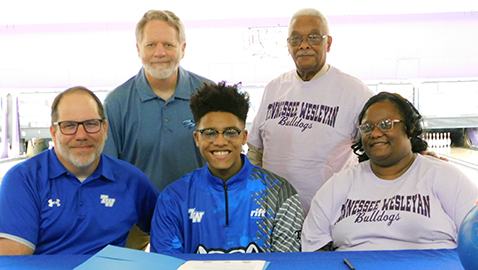 Signing Littlejohn is ‘feather in the cap’

Devean Littlejohn has advanced to the next level in his bowling career.

And there may be another level after this one.

The Bulldogs are currently ranked No. 21 among the collegiate men’s teams in the nation by the United States Bowling Congress.

“I decided to go with Tennessee Wesleyan because I felt it was going to give me the best opportunity to showcase my talent, help TWU be even better and it’s close to home,” said Littlejohn, who attended Oak Ridge High but bowled for Hardin Valley Academy under the TSSAA’s co-op program.

“The community (in Athens) also is really great and I think it’s going to be a good fit for me.”

Devean also had offers from University of Pikeville in Kentucky and Tusculum University in Greeneville.

“I just hope to go to college and bowl very well for the team and hopefully win the Mid-South Conference championship and see how good we can make this program,” added Littlejohn, who plans to major in psychology.

“Bowling professionally is part of my goal and that’s another reason why I chose Tennessee Wesleyan,” he said. “I’ve heard a lot of good things about the coach, Aaron White. He worked very well with me when I went down there and visited, so I think he’s going to help me get to that point.”

Littlejohn won the state title on Jan. 20 in Smyrna, defeating Jacob Brown of Walker Valley 238 to 197 in the championship match.

Hardin Valley Coach Terry Disney said: “Devean rose to the challenge and had a good day (winning the state title). I think he’s a wonderful kid and he was a good teammate at Hardin Valley. It’s been a great relationship all the way around.”

“We are so excited to get Devean,” said White, who is in his first season as TWU’s new head coach. “He’ll fit right in with our guys. They all know each other.

“It’s absolutely a feather in the cap. Adding him to the roster will immediately add to how good we are going to be.”

White, a Cleveland native, brings more than 34 years of bowling experience to TWU. He is a two-time Professional Bowling Association regional champion and has rolled over 60 perfect 300 games.

“Floyd was his youth coach at the Oak Ridge Bowling Center, where Devean started his love of bowling,” said Zendra. “Smyrna Bowling Center and Strike & Spare at Western helped Devean learn to compete with the best.