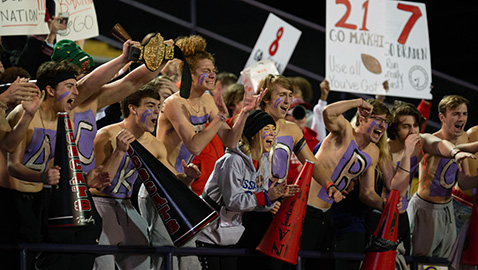 Central High’s football team went to work early and quickly in pursuit of a second straight TSSAA Class 5A state championship and by evening’s end it had indeed been a Black Friday at Tennessee Tech’s Overall Field.

Wearing all black uniforms with red trim and numerals for the first time in their three state title appearances, the Bobcats built a 24-point lead by halftime and kept the Summit Spartans at a safe distance the rest of the way for a convincing 30-7 win in the BlueCross Bowl at Cookeville.

“It’s an unbelievable feeling,” said Isaiah Osborne, senior wide receiver who played a big part in bringing the gold ball back to Knoxville again. “That’s it. We did it. We did it.

“They were a good team, but we just wanted it bad.”

Central senior quarterback Dakota Fawver, named the game’s MVP, completed 16 of 21 passes for 216 yards and two touchdowns – the vast majority of it in the first half – but would be the first to say he wasn’t a one-man show.

Osborne led the receiving corps with seven catches for 75 yards and a touchdown and senior teammate Braden Gaston contributed three receptions for 53 yards and a score.

Defensively, the Bobcats gave the Spring Hill team a lot of trouble, particularly with their outside linebackers, said Summit Coach Brian Coleman.

Kaleb Fortner, junior OLB, had three tackles for loss and a sack. Senior end Eunique Valentine made three solo stops and assisted on six tackles. Sophomore end Mark Adams had 2.5 TFLs and a sack. Junior tackle Isaiah Huff was in on four tackles and had 1.5 TFLs.

Central kept the heat on sophomore quarterback Destin Wade all night long, sacking him three times and intercepting three of his passes as he managed to complete only 5 of 17 attempts. Jadin Horton, Gaston and Valentine came up with the picks.

Sophomore punter Ryan Bolton gave the Bobcats a big edge in the kicking game, averaging 44.6 yards on five punts, including a 62-yarder on his last one that flipped the field early in the final quarter.

It was a true team win for Central, which finished the season 13-2. Each player did his part, no matter how big or small.

“It’s what we preach,” said Central Head Coach Bryson Rosser. “It’s family. It’s forget about me, I love you. When your number is called, do your part.

“Everybody doesn’t have equal responsibilities, we know that. But whether it’s 73 snaps or three snaps, you have to do your part and our kids are completely bought into that philosophy. They make sure they do everything they can to be successful on Friday nights.”

One key stat in the game showed Central went four for four inside the red zone, while Summit (12-3) converted only once in scoring range.

Central shifted into its up-tempo offense on its second possession of the game and Osborne capped the 66-yard drive with a 12-yard catch so deep in the back of the end zone, he crashed into the goal post. Fortunately for the Bobcats, he walked away from the collision and would be heard from again later. Jarred Swislosky’s PAT kick made it 7-0.

A defensive pass interference call on Summit early in the second quarter gave the Bobcats a first-and-goal at the 6-yard line. Senior running back Jason Merritts blasted up the middle on the next play and it was 14-0.

Wade broke loose around right end for a 54-yard run to the Central 20 and would have scored if not for senior Ma’khi Anderson’s saving tackle. The Spartans moved closer, but Gaston intercepted Wade’s pass on third-and-goal from the 8.

That play gave the Bobcats the chance to throw an early knockout punch, and they did. Osborne pulled in a pair of 12-yard passes and the Spartans committed another pass interference foul that gave Central a first down at the Summit 40. Two plays later, Gaston ran a fly route down the middle and Fawver hit him with a 40-yarder. Swislosky’ kick made it 21-0 five minutes before halftime.

Summit slowly drove to the Central 31 but was halted again when Kalib Fortner drilled Wade behind the line, the ball came out and senior inside linebacker Malik Robinson pounced on it.

The Bobcats marched downfield, with Liam Fortner snagging a pair of passes along the way, and worked the clock beautifully. Swislosky’s 35-yard field goal just got over the cross bar as time ran out and Central took a commanding 24-0 lead into the dressing room.

Coach Rosser said he told his team at halftime to not let up.

“We told the seniors you have two more quarters of high school football left for the rest of your life. The next level is not promised, not guaranteed.

“We knew they (Summit) would come out fighting. Coach Coleman does a great job with his team, so we said, ‘Hey, you got two more quarters left. What if I told you that you have 24 minutes of football left for the rest of your life?’ And I think they came out there and played lights out.”

Summit didn’t quit. Wade connected with George Odimegwu for a 64-yard gain to the Central 17 on the third play of the second half. Gaston made a saving tackle, but the Spartans still managed to score as Wade got across the goal line on third-and-goal from the 1. Elijah Mooney’s PAT kick cut the deficit to 24-7.

Central turned to its running game to move the ball and take time off the clock. Bolton ended up punting, with the ball just rolling into the end zone with 4:30 on the clock.

The Spartans still had hope. Wade passed 36 yards to John Casey for a first down at the Central 31. The Bobcats jumped offside, and then Wade ran for six and 12 yards for a first-and-goal at the 8.

Huff stopped Wade at the 7 on first down. Bottled up, Wade was tackled for a 1-yard loss back at the 8 by Valentine and Adams on second down. Then Kalib Fortner sacked the Spartan QB for an 11-yard loss and his desperation fourth down pass fell incomplete on the first play of the fourth quarter.

Central picked up one first down before Bolton punted his 62-yarder.

Taking over at its 18-yard line with 9:30 remaining, Summit couldn’t pick up a first down. Noah Parker sacked Wade for a 7-yard loss on first down. After his second down pass was dropped, Wade was sacked again for a 9-yard loss by Adams with Valentine applying pressure.

Summit had to punt and Gaston returned it to the Spartans’ 19. Merritts galloped into the end zone on first-and-goal at the 8 for his second touchdown. Swislosky’s kick was blocked, but Central had its 30-7 margin with 6:03 to go.

Valentine pretty much drove in the final nail with an interception at midfield.

EXTRA POINTS: Central’s band played the National Anthem before the game and members of the school’s Navy Junior ROTC served as Color Guard … Central had 10 buses to make the trip to Cookeville, including two that carried the team. J.D. Lambert, Central Athletic Director, said the large number of fans that went to the game was a testament of the school’s and community’s support … Once the team got back to Knoxville, it received a police escort to the school, where they were greeted and saluted by fans, friends and family members in the school gym. The celebration was still going on at 2 in the morning.