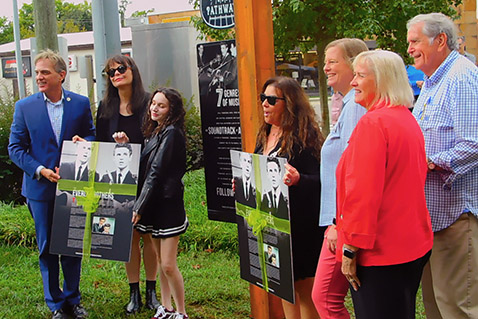 They only lived in Knoxville for a brief two years but the impact they had on our region and the nation is astounding. The singing brothers combined country with rock and roll and kicked off careers that would produce hit songs and influence many, many nationally known singers.

The Everly Brothers Park in Bearden was created by local residents who attended West High School with the boys and by interested Bearden citizens who wanted to do something to remember the duo. The park, on a small corner of Kingston Pike and Forest Hills Boulevard, features sidewalk plaques sharing memories of the brothers from Paul Simon, Bob Dylan and many others.

Last Monday morning the little pocket park was the site of an important event. Commissioner Mark Ezell of Tennessee Tourism, surviving family members of the Everly Brothers and local supporters unveiled a state marker designating the Knoxville pocket park as a stop on the Tennessee Music Pathways.

Kim Bumpass of Visit Knoxville hosted the event along with former Councilman Duane Grieve and Dennis Owens introduced the Everly family and spoke briefly. Present were Patti Everly, Phil’s widow; Venetia Everly, Don’s eldest child; and her daughter, Arabella, Don’s first-born grandchild. Owens spoke of his involvement in creating the park and the history of the brothers in their brief residence in Knoxville and at West High School.

Grieve talked about the creation of the park, the efforts of the Bearden Council and Terry Faulkner plus the help of musician Graham Nash in getting various national musicians to send a signature and a message. The latest of those pathway markers came from Dolly Parton.

Y’uns Jugband performed various Everly tunes before and after the ceremony. The group includes Steve Horton, Dan Gammon and Will Ross.

The Tennessee Music Pathways recognizes places across our state and encourages visitors to stop by and stay longer in our state.

One of the messages on the walkway plaques is from Bob Dylan who wrote, “We owe these guys everything.” Obviously, Phil and Don Everly’s two years in Knoxville left their stamp on our local musical history. Both brothers have passed away but their impact on our community is lasting and important.