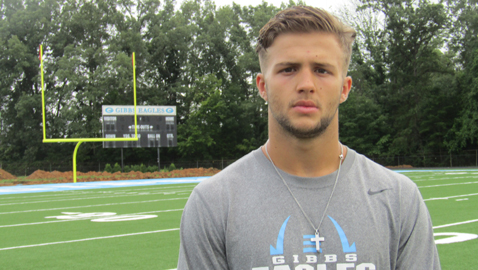 Hunter “HT” Fortner says he likes hard work. So much, in fact, the Gibbs High graduate left behind a football scholarship offer from the University of the Cumberlands in Williamsburg, Ky., and became a preferred walk-on in the UT-Chattanooga wrestling program.

While waiting a couple of weeks for official scholarship papers to arrive to be signed, Fortner chose a different path to take in his athletic career.

“I missed the hard work on the mat and I missed wrestling – so I’m just going to go wrestle,” recalled Fortner, who won the TSSAA Class AAA state championship in the 182-pound weight class in February after leading Gibbs to the football playoffs at quarterback.

Tim Pittman, Gibbs’ wrestling head coach, had some contacts with UTC Head Coach Heath Eslinger, and they got me a visit with Coach David Hoffman, the assistant, said Fortner.

No wrestling scholarships were left at UTC, but Fortner said he has been told he will have the opportunity to earn one later.

“They have a big class of over 13 freshmen coming in and 30 wrestlers are on the team,” said HT.

Fortner finished as the second winningest wrestler in the history of Gibbs’ program with 151 victories. He was 51-2 his senior season with both losses coming against defending state champions from Georgia.

Fortner’s makeup as a wrestler and linebacker contributed to him being tough to stop when carrying a football.

His QB days would have been over had he stuck with football at the Cumberlands.

“They just switched from the triple option to the read option, so they were going to throw a lot more,” said Fortner. “They were talking about sticking me at slot wide receiver or (using me) as a defensive guy.”

Chattanooga, a NCAA Division 1 member, has a traditionally strong wrestling program and the Mocs have been dominant at times in the Southern Conference.

“They should have about seven guys ranked in the Top 15 in the nation this year starting off,” said HT.

Fortner has found offseason workouts against some of UTC’s talented and strong upperclassmen to be quite a challenge.

But he hasn’t lost his fighting spirit. In fact, he has set some lofty goals for himself at UTC.

“My first goal will be to start, the second goal to win So Con and the third goal to be an All-American (by placing in the top eight at the nationals),” he said. “The So Con had only three to do that last year.

Fortner, who doesn’t want to take a redshirt year, believes he was at his best as a high school wrestler on his feet and when he was on top.

Now he feels like he’s pretty much starting over.

“Normally they say it usually takes three to six months for a freshman to get competitive,” said HT. “I don’t know. I’m a month in and I’m still getting whooped.

“It’s just so much different – from going to the big guy in high school to the smallest guy.

“I’m really the only new guy they brought in that’s over 170 pounds.”

Scottie Boykin is one of the veterans who has been working over the young Fortner on the mat this summer. The 197-pounder from Murfreesboro Riverdale is a former Southern Conference champion and two-time NCAA tournament qualifier.

“He’s a complete stud,” said HT. “He messed up his elbow last year and got a medical redshirt, so this is his last year of eligibility. I expect him to be an All-American. He’s a really good guy. I practiced with him before I went on vacation.”

Boykin has given the newcomer encouragement.

“After he whooped me, he told me I did a good job fighting,” said Fortner. “He said I brought it today for sure. He said to keep doing it and ‘you’ll be taking me down like that. You’ve got to get better every day.’”

Fortner, who finished with a GPA around 3.6 in high school, plans to major in nursing, get a nursing degree and be a RN. “Maybe work toward being a nurse practitioner,” he added. “That’s what I want to do.”

HT said he’s definitely going to miss the Gibbs community. “I like coming home and driving the roads again. It’s just always going to be something about it.”

Fortner has twin brothers, Kalib and Lian, who will be freshmen football players at Central this year and another brother, Carson Reep, who will be a lineman on the eighth grade team at Gibbs.

A lot of Gibbs fans surely will be missing HT too and wishing him the best.