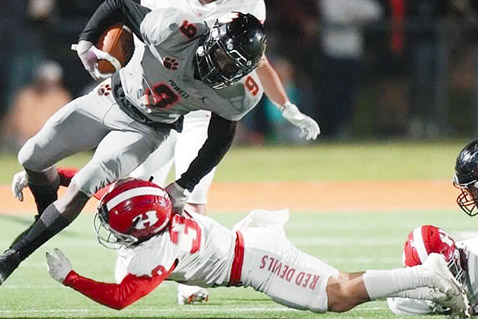 Halls High’s Caden Stephens and Aspen Calloway made their coaches proud during their prep careers.

Stephens stood out in football and also was a track athlete with excellent speed. Calloway could pitch and hit in softball.

Both also were honor students and have been selected Halls’ male and female Student-Athletes of the Year for 2021-22.

“From the first day I was here he stood out to me because of his work ethic,” added Hughes. “He is a young man that is extremely gifted, but what will always separate him from others is how hard he practiced. He was a player that never turned it off. I am extremely proud of him and not surprised one bit for his achievements.

“Caden was a three-year starter and the heart of our defense the last two seasons. His senior year he had over 70 tackles and forced several turnovers.”

The three-time All-Region player, who had a 4.0 GPA, will continue his academic and athletic career at Lindsey Wilson College in Columbia, Ky.

Stephens impressed in outdoor track this spring when he ran a 10.96 in the 100-meter dash. He also ran on Halls’ victorious 4×100 relay team at the KIL meet.

Halls softball coach Bryan Gordon said: “Aspen has meant as much to our program as any kid we have had come through here since I’ve been here. She has done an outstanding job for us in the circle and been a staple in the middle of our lineup for three years.

“We are going to miss her for sure but look forward to her doing great things at University of the Cumberlands.”

The Mid-South Conference school in Williamsburg, Ky., which is only an hour drive from Halls Cross Roads, posted a 35-16 record this past season. In Calloway, the Patriots will be getting a pitcher / first baseman who can hit with power.

Aspen had a .549 batting average and 27 RBI with 18 doubles, one triple and five home runs this spring. She only struck out twice.

The Tennessee Softball Coaches Association named her All-State this season and she will represent the East in the TNSCA All-Star Game on July 14 at Volunteer State Community College in Gallatin.