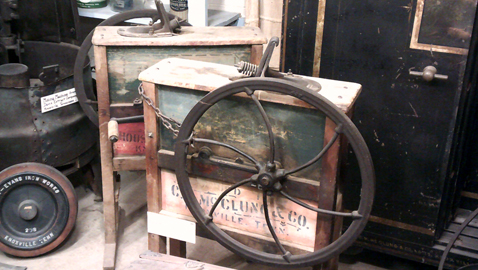 “Let the past touch your soul” and return to a an earlier, simpler era by visiting the Museum of Appalachia which is located about 20 miles north of Knoxville off the Clinton exit of I75.

While the museum has modern buildings which house one of the largest collections of Appalachian artifacts on shelves and in glass display cases, what makes the museum unique is what is outside these buildings. Located on the 60 plus acres of the museum grounds are over 30 log cabins and log farm buildings that were moved from their original sites and rebuilt to resemble an Appalachian farming community. The cabins are so realistically equipped with furniture and household items of their particular time period that is makes a visitors feel like they are intruding into someone’s private home.

The nonprofit museum, which is affiliated with the Smithsonian Institution, was founded in 1969 by John Rice Irwin, an east Tennessee educator and businessman man with a love for preserving history. It started humbly with Irwin’s first acquisition at a local auction of an old wooden horse-shoeing box and grew to become what the Tennessee Blue Book describes as “The most authentic and complete replica of primitive Appalachian life in the world.”

One of the earliest and most primitive cabins is the Dan’l Boone Cabin, so called because it was used as a set for the television series “Young Dan’l Boone.” However, the cabin has no connection with the famous frontiersman. It was originally located in the Rosedale community in the New River section of Anderson County and called the Patterson Cabin. It was built in the early nineteenth century and has wooden shutters over the windows, a dirt floor and a stick and mud chimney.

From about that same era is Irwin’s Chapel Log Church which came from the Hamburg community of Madison County, North Carolina. It boasts a simple steeple, a pot bellied stove and a rocking chair for the preacher.

The Mark Twain Cabin is more substantially built than the Dan’l Boone Cabin with glass windows and a stone chimney . It was originally located in the Possum Trot community near Pall Mall in Fentress County and was the home of the famous author’s parents.

Nestled, among the working gardens and pens for farm animals are a corn crib, smoke house, blacksmith shop and a cantilever barn which originally stood near Seymour. The loft of this barn projects over the ground floor on all sides giving an open area to house farm implements and wagons. Up the hill from this barn is a mid twentieth century farm sawmill powered by a John Deere tractor. There is also a molasses mill turned by real horsepower which squeezes juice out of sugar cane to be cooked into molasses in a metal pan over a nearby fire.

What Appalachian village would be complete without a moonshine still? The museum’s still has the added authenticity of having been constructed by famous moonshiner Marvin “Popcorn” Sutton.

Where do moonshiners sometimes wind up? In jail. The museum’s 6 by 9 foot steel jail cells, which each house four prisoners, came from Madisonville.

In the Display Barn the visitors can see an old country store and post office.

The signs of Harrison Mayes are also on display. After the Kentucky coal miner survived a mining accident in 1918 he spent 70 years constructing and placing religious signs on the side of highways all over the country.

In one of the display buildings is a large collection of the unique woodcarvings of James Bunch of Madisonville. During the 15 year period he tended for his bed ridden wife, he took up whittling with his pocketknife and created a wide array of intricate wood carvings.

The museum hosts a variety of special events and is a popular spot for weddings.