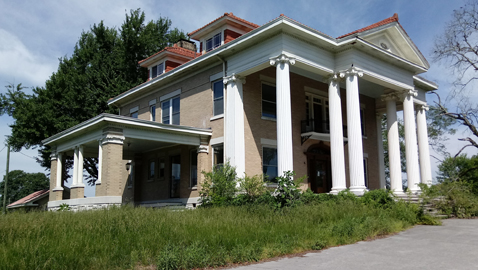 A note on the door warns people to keep out of the historic old mansion which stands empty, overgrown, and possibly abandoned.

The Sterchi Mansion, also known as Strafford Hall, was built in 1910 by the Sterchi family and was once part of more than 300 acres that included a dairy farm. Today the empty house on Dry Gap Pike sits just in front of a large subdivision and most of the farm is now the Sterchi Hills subdivision.

“No resolution seems to be on the horizon for the house. It was for sale after being in foreclosures proceedings. We’d like to bring it to the attention of anyone looking to purchase the property,” she said.

The Fragile 15 list of endangered properties is announced by Knox Heritage each year. This year’s announcement was made at the Old Knoxville High School with Kevin Murphy, President of the Board, hosting the event.

To become involved in saving and restoring our endangered heritage you can contact Knox Heritage at (865) 523-8008.