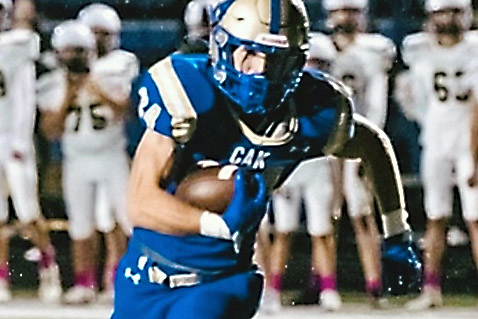 The pieces are falling into place for Grant Sterchi.

Christian Academy of Knoxville’s male Student-Athlete of the Year will be attending the United States Naval Academy this fall in Annapolis, Md., and now it appears he may also get the opportunity to be a walk-on on the football team.

“It would be hard for me to think of a player that I’ve coached over the last two decades that is more deserving of an appointment to the USNA than Grant,” said CAK Head Football Coach Travis Mozingo. “He’s a great student, a great athlete and a young man of great character.”

Sterchi, a wide receiver and defensive back, was recruited this past year by the football staff and Navy, recalled Mozingo, but he never was able to solidify an official offer.

“When Grant received his appointment, we reached out to the football staff and made them aware of this development,” said Mozingo. “After a few conversations, the football staff is optimistic on Grant ‘walking-on’ and being part of the Navy football team this coming fall.

“To say I’m proud of Grant would be a huge understatement – he’s earned this opportunity, and I’m excited for both him and the United States Navy.”

“His teachers and coaches describe him as dependable and hardworking,” said Abby Williams, Assistant Athletic Director.

CAK’s female Student-Athlete of the Year is Ainsley Patterson, Class of 2022.

She excelled in academics with highest GPA in Personal Finance, CP Physics and AP Calculus AB.

Ainsley also was a member of the Student Senate, NHS and MU Alpha Theta.

“Her teachers and coaches describe her as ambitious and dedicated,” said Williams.

In athletics, Patterson competed in soccer and track. She ran on the 4×800 and 4×200 relay teams her senior year.

“Ainsley is a fierce competitor and approaches all things with intensity and passion,” said Bart Kareken, CAK’s track and field coach. “She works hard to improve as an athlete and is willing to be coached. She carries herself with integrity and excellence, which is why I can’t wait to see what she accomplishes in the future.”

Patterson said she is going to UTK to major in Kinesiology and pursue a career in occupational therapy.