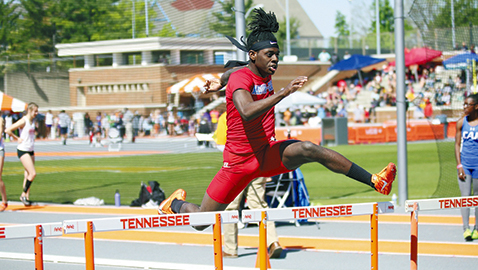 Rebecca Story’s high school days are counting down. So where does her last KIL track meet fit in it all?

“I am really excited to be graduating,” replied Story, one of the TSSAA’s greatest ever distance runners, when asked to describe her feelings last week.

“I have had an incredible five years of running for CAK high school. I will really miss my teammates who will be my friends for life, and I will miss the Knoxville running community!”

Knoxville Youth Athletics got Rebecca started in running when she was in the sixth grade.

“My coach, Tony Cosey, has been with me my entire career! It is bittersweet, but feels like the right time to move on. I will always have roots in Knoxville, Tennessee, and it will always be home.

“I am so excited to bond with my new team at Stanford and win national championships together!”

Knoxville track fans can see Story run her final KIL meet Tuesday night at Hardin Valley Academy. Most likely, she will run in the 1600 and 800 events as she has in all of her previous KIL meets.

In the past, Coach Cosey has preferred to not run Story in the 3200 at the KIL to keep her fresher for post-season meets, including the state, where she swept the 800, 1600 and 3200 for the second year in a row last season.

Story captured her 11th TSSAA state championship when she added her second cross-county title to her total last fall.

KIL WATCHLIST: Add Kiyontae Warren to the list of track and field athletes to watch at this year’s KIL meet. The Austin-East junior posted the top time in the state when he won the 300-meter hurdles in 38.64 at the Volunteer Track Classic at UT April 21.

Other local winners at the VTC included South-Doyle sophomore Elijah Young in the 100 dash, Hardin Valley senior Willington Wright in the 400, Catholic junior Jake Renfree in the 800 and mile run and Bearden senior Josh Sobota in the discus and shot put.