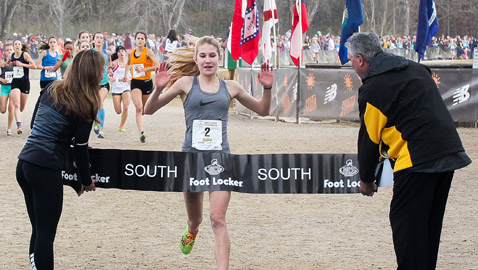 Rebecca Story has had another prestigious accomplishment in her high school cross country career.

Story, a Stanford University signee, covered the 5,000-meter McAlpine Greenway course in 17 minutes, 24.5 seconds, about four seconds ahead of sophomore Victoria Starcher of Ripley, W. Va., and a pack of runners.

In addition to Story, two other local runners – Carter Coughlin of Webb School and Jake Renfree of Knoxville Catholic – placed fifth and eighth, respectively, in the boys’ South Regional to earn spots in the nationals, which will be held at Morley Field and Balboa Park.

John Tatter, a senior from RJ Reynolds High School in Winston-Salem, N.C., took first place with a time of 14:55.9.

The Top 10 boys’ and girls’ finishers in the South, Northeast, Midwest and West regions qualify for the FLCCC.

Story finished sixth in the 2016 South Region meet, but lowered her time 14 seconds in this year’s race, which was held under clear skies and 45 degrees.

The second through 10th place runners finished within 2.3 seconds of each other. One of those in that pack was Heather Holt of Fairfax, Va. She had run a 17:23.4 to place second in last year’s regional but came in seventh this season.

In this year’s Midwest Region, the champion ran a 17:13. The top time in the Northeast Region was 17:47. The West Region was scheduled this past Saturday.