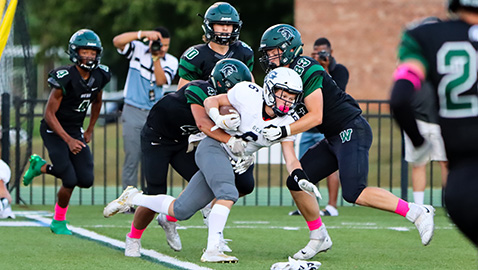 This has been an unusual football season for Grace Christian Academy on and off the field, and the Rams and their fans are enjoying every crazy minute of it.

Beating Webb for the first time ever Friday night is certainly on the list. How GCA did it – running the ball more than passing it – also was strange to see.

Grace Christian’s schedule alone has been weird. In the first seven weeks, the Rams have had five road games and only one home game.

Mother Nature (lightning delay) even made them make the road trip to Silverdale Academy in Chattanooga not once but twice to play that game, which started on Friday night (Sept. 27) and ended on Saturday afternoon (Sept. 28).

The Rams have also had road trips to Crossville to play Stone Memorial and to Jamestown to play York Institute in non-region games.

Winning has helped make this season fun so far, despite how bizarre it has been. Its 14-7 win over Webb at David Meske Stadium not only snapped a four-game losing streak to the Spartans (Webb won 43-7 at GCA last year), it gave Grace Christian a 5-1 overall record and put the Rams in first place in the Division II Class A East Region at 3-0.

While many local teams have open dates this week during fall break, Grace Christian, of course, will be back on the road. But the Rams have to be looking forward to it. Their game at Chattanooga Christian (3-2, 2-0) could go a long way in determining this year’s region champion.

Bradley, whose teams over the years have been known for air raids, may have surprised Webb with his ground attack. He said that was the plan.

Caleb Curcio, a fast and tough 6-foot, 170-pound junior, led GCA’s win over the Spartans, rushing for 129 yards on 22 carries and scoring both of the Rams’ touchdowns.

Grace passed the ball only 17 times in the game (five times after intermission) for 113 yards.

Curcio bolted off right tackle for 36 yards and high stepped into the end zone to give GCA a 7-0 lead midway through the first quarter. Chase McCullar added the first of his two PATs.

Webb’s next possession was picked off by Michael Human at the Spartans’ 41. Grace quarterback Cooper Riggs had a 38-yard touchdown run nullified by a block in the back penalty and the Rams’ threat was halted by Jackson Baker’s interception.

Elijah Bane got behind the Grace secondary late in the first quarter and hauled in a 50-yard pass from Joseph Moore. Runs by Garrett Carnathan helped move the ball to the Grace 4, but Moore was injured when he was sacked by Jared Long on second-and-goal and had to leave the game. A pass by backup quarterback Charlie Robinson, a freshman, on the next play was intercepted by Devan Coffey.

The Rams took over at their 14 and drove 86 yards to go up 14-0. Grant Warwick had a 29-yard reception in the drive. When GCA got to the Webb 20, Curcio took over, carried five straight plays and scored from the 5 with 2:40 left in the half.

The Spartans drove 62 yards in 16 plays in the third quarter to make it interesting. After Webb Coach David Meske converted a fourth-and-one situation from the Spartans’ 47, with Grissim Anderson rushing for three yards, Carnathan had a 15-yard run and Baker caught a 22-yard pass in the flat from Moore. Webb capped the march with Moore’s sneak from inside the 1 with 2:00 showing on the third quarter clock.

Grace’s defense forced Webb to punt twice in the fourth quarter and the Spartans couldn’t move the ball through the air on their last possession late in the game.