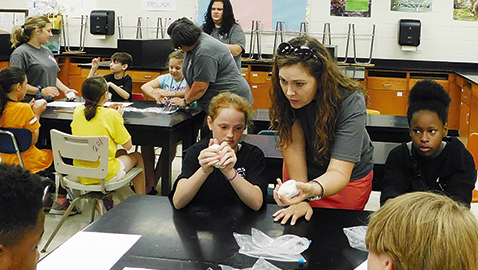 In June, the halls at Central High School are normally quiet. No slamming of lockers and no rushing to class to beat the tardy bell.

And things were relatively calm Wednesday morning unless you made a visit to the school’s science wing.

This year’s theme was outer space as students spent the week studying the solar system in both theory and practice.

The five-day event culminated Friday with students displaying a scale model of the solar system at Dan Y. Boring Stadium.

Some students made the planets out of clay. Others designed survival colonies for Mars and still others did experiments with weighted backpacks to simulate various gravitational forces on the different planets.

The summer of 2019 marked the second occasion that Central hosted a science camp. In 2018, the camp focused on general science according to CHS assistant principal Debbie Sayers, who began the camp with the assistant of former principal Mike Reynolds, who recently retired from the Knox County School System.

Sayers is no stranger to summer STEM and STEAM Camps. She collaborated on Knox County’s first one at Hardin Valley Academy with the recently retired George Ashe, who served as the principal of the school’s Science, Technology, Engineering and Mathematics School since it opened over a decade ago.

“Mr. Reynolds came to me and expressed interest in starting an academic camp on this side of town,” Sayers said. “I started the one with George out at Hardin Valley and we had a satellite camp at Farragut.”

With that, Sayers solicited the help of several teachers throughout the school district, including her daughter, who is an elementary school teacher, Central High science teacher Tracy Pace and Tiersha Adkins, who teaches in the county’s Gifted and Talented Program.

Sayers also enlisted help of Central High School students to serve as camp counselors, many of whom returned this year after working the inaugural camp in 2018.

“The teachers are all volunteering and we had some students come in and work as camp counselors and they all learned. They all liked working with the kids,” Sayers said. “Our repeat counselors said they enjoyed it and they learned, so they wanted to come back.”