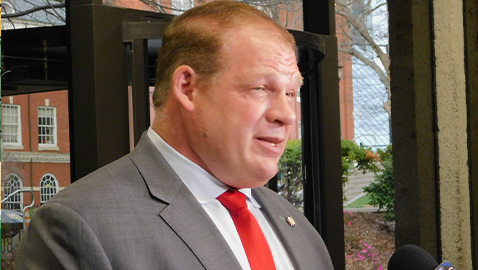 “I’m going to veto it,” Mayor Glenn Jacobs told the media following the first vote by the Knox County Commission to authorize a feasibility study on Knoxville Center Mall. The motion, introduced by Commissioner Justin Biggs, would include taking bids on a study of the suitability of the empty mall to house much of Knox County Government.

Prior to the regular meeting of Knox County Commission, Mayor Jacobs announced he would be asking for postponement moving the school offices to the TVA Tower and to postpone the sale of the Andrew Johnson Building. He promises a vote of the commission in January but it is becoming obvious that the commission may not approve those deals.

Opponents of the mall idea have cited the City of Knoxville not being interested in joining the county there. Deputy Knoxville Mayor Bill Lyons clarified that statement during public forum by saying the city “has not invested” in pursuing a study.

A quick survey of commissioners by The Focus indicates a majority of the members oppose the TVA Tower agreement.

Commissioner Charles Busler’s original motion on the mall was to “explore the possibility of purchasing” the mall. The Biggs motion built on Busler’s idea but deleted “purchasing” until a study could be done on the building, grounds, and transportation in the area.

Commissioners Randy Smith, Brad Anders, Larsen Jay, Evelyn Gill and Chairman Hugh Nystrom opposed the study motion with Gill saying the entire area needs such a study. Busler and Commissioner Michele Carringer said they met with the mall owners and the owners are willing to consider selling the complex. Busler proposed several possible uses and said he was simply asking for a study.

Jacobs told the commission the cost per square foot would be too great. Anders and Smith said the county cannot do business with a company that owes taxes. Law Director Richard (Bud) Armstrong said the county can negotiate with a tax-owing company but cannot enter into a contract.

“It’s a colossal waste of time,” Jay said, urging the body to let the private sector deal with the future of the mall.

“It is an unwise use of taxpayer’s money,” Mayor Jacobs said.

“Let’s see what the possibilities are,” Carringer said.

Finance Director Chris Caldwell said it could cost $250,000 to $300,000 to do a study and said the commission doesn’t have enough money in its budget to fund the study.

Following zoning the commission reconvened and Commissioner Smith asked to reconsider the vote and the study was changed to include the entire mall area, including Interstate 640 around Washington Pike and Millertown Pike, and the commissioners voted unanimously for it. The motion is to have the county and city work together through the Knoxville’s Community Development Corporation for “best use” and to see how the government can assist in redevelopment there. Commission Beeler made the motion and Commissioner Dailey seconded it.

Although the motion includes the city and possible KCDC funding, the city has shown no interest in the project. The passed motion apparently negates a veto by the county mayor.