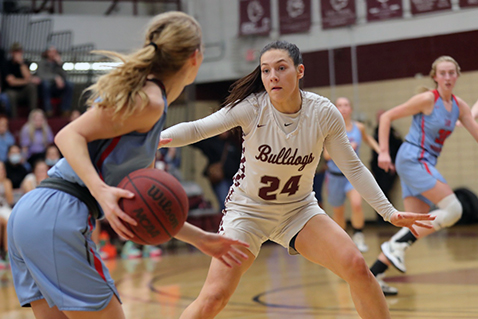 Playing on one of the state’s best basketball teams that includes five college signees, Jenn Sullivan of Bearden High still stands out.

Maybe it’s the extra things she does during a game that don’t show up as statistics in the paper or maybe it’s her strength the fans notice when she’s on the court.

Whatever it is, it’s working for her and she’s been selected as The Knoxville Focus / Coaches’ 2021-22 Knox County Player of the Year.

Sullivan, who also is a Class 4A Miss Basketball finalist, averages 15 points per game along with five assists and four rebounds.

Jenn’s stats that don’t usually make the paper and aren’t the prettiest include the times when “she gets on the floor” for loose balls or “takes charges,” said Coach Underwood.

“She does so many things in being a complete player and I think that’s what helps her be a great leader for us.”

As for her strength, Underwood said: “She’s very strong. We joke that she probably could be a middle linebacker.”

Her strength gives her good body control and allows her to finish at the rim or stop on a dime and shoot a mid-range shot or 3.

“She’s so strong, sometimes when she takes contact, she still stays balanced when most kids wouldn’t,” added Underwood.

“She’s a gym rat, whether it’s shooting the ball or working on the physical side of herself,” said Underwood. “She’s taking it serious, is in good shape and works really hard on her diet as well as her game. She knows she’s getting a scholarship for a reason and she’s worked hard at it.”

Sullivan also is fun to watch.

“She plays very intense and gets after it and that’s an exciting thing for a fan to come in and see,” said the Bearden coach. “Jenn gives her heart and soul and she’s got bumps and bruises by the time it’s done. She’s a little bit of a throwback player, giving everything she has every second.”

Sullivan’s biggest improvement this season has been getting stronger with her left hand, said Underwood.

“She was really good as far as her mid-range jumper, her 3 and getting to the rim. But now she’s gotten even better in being able to get to the rim with her left hand and finishing.”

Each of Bearden’s five senior starters are captains and Underwood says Sullivan is probably one of the best in leading by enthusiasm.

“She gets more excited when she passes for an assist and somebody hits a shot than hitting her own shot. That’s always a special thing to see.”

Underwood repeats as Coach of the Year

Bearden’s Justin Underwood is The Focus / Coaches’ Knox County girls’ Coach of the Year for the second straight season.

Much like last year, his Lady Bulldogs have been ranked among the state’s top teams throughout the season and were No. 3 in The Associated Press’ final Class 4A poll.

Bearden swept the District 4 and Region 2 tournament titles and went into this past Saturday’s Sectional game against Science Hill with a 32-3 record.

Abby Williams, who guided Christian Academy of Knoxville to the Final Four of the Division II-A state tournament after a slow start this season, was the runner-up for Coach of the Year.

Bearden and Farragut have two on first team

Head coaches at each of the 20 Division I and Division II high schools in Knox County that play basketball were contacted by The Focus to nominate players from their team for All-Knox County consideration based on regular season play.