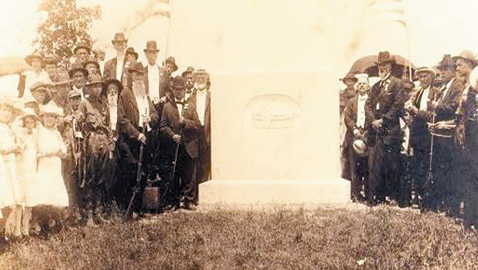 The riverboat was built for about 376 passengers but, because the captain was being paid for each passenger he could carry, the Sultana was packed with more than 2,000 people on its final voyage. Most of the passengers were Union soldiers returning from the Civil War or from Confederate prison camps.

On April 27, 1865, the boilers on the Sultana exploded a few miles north of Memphis. It is estimated that 1,800 of the passengers died as the boat burned and sank into the Mississippi River.

Descendants of those who died or survived what is considered America’s Greatest Maritime Disaster, have gathered over the years to remember that all-but forgotten tragedy at the end of that great war.

Several of the soldiers on the ship were from Tennessee, and many of them from East Tennessee. The 3rd Tennessee Cavalry, mustered in Knoxville, made up most of 463 of those Tennesseans on board. One of those men was John H. Simpson of Knoxville, who was blown off the boat from the explosions and rescued later in the Mississippi River. He returned to Knoxville and, in 1889, started Sultana reunions in Knoxville.

Another Knoxvillian to survive the explosion was James M. Johnson.

Many of the soldiers aboard the ship were survivors of the notorious Confederate prison camp in Andersonville, Georgia. The prison camp held 45,000 Union prisoners of which 13,000 died while there. Conditions were horrible and the camp commander was hung following the liberation of the prison. The Knoxville cavalry prisoners had been held in a prison camp in Cahaba, Alabama.

In 1982 an archeological expedition found what is thought to be the remains of the Sultana some 32 feet under a soybean field on the Arkansas side of the Mississippi, four miles from Memphis. The river had changed course several times and the main channel is now two miles east of where the boat exploded and sank.

Knoxville’s Norman Shaw, a founder of the Knoxville Civil War Roundtable, became interested in the Sultana explosion when he met the daughter of a survivor at a roundtable meeting in 1987. Shaw told The Focus that for the first 14 years the Association of Sultana Descendants and Friends held annual meetings in Knoxville and then began holding meetings at different sites important to the incident, the first being in Vicksburg where the soldiers boarded the boat and took part in the dedication of a state historic maker there.

“My great-great-great grandfather was onboard the Sultana and was lucky enough to survive,” Ms. Diedre A. Cody wrote The Knoxville Focus. The Columbus, Ohio, woman wrote to remind everyone of the Association of Sultana Descendants and Friends’ reunion in Knoxville on April 22nd and 23rd. The event will be held at the Mt. Olive Baptist Church at 2500 Maryville Pike.

Mount Olive has a special connection as a monument commemorating the Sultana was dedicated 100 years ago. The large stone was rededicated last year.

“We’re calling the reunion a Celebration of the Monument’s 100 years,” Shaw said.

This year’s reunion will kick off at 7 p.m. in the Mount Olive Baptist Church sanctuary on Friday, April 22.  There will be discussions, announcements and music by the Appalachian Harmonizers quartet.

On Saturday, April 23, a bus tour will begin at 8 a.m. The bus will leave the Holiday Inn on Cedar Bluff and visit various Knoxville area Civil War sites. Lunch is at the S & S Cafeteria on Kingston Pike.

At 3 p.m. that Saturday, there will be a gathering at the Sultana Monument at Mt. Olive Church to celebrate its 100 years with an Honor Guard, fife and drums, firing salute, recognitions and a speaker.

At 7 p.m. there will be a banquet dinner at Bearden Banquet Hall at 5806 Kingston Pike.

The cost of the events are $3 for the church events, $20 for the bus tour, $5 to visit to the Mabry-Hazen home and Confederate Cemetery, $22 for the banquet and $2 for a Souvenir ribbon.

You can also get more information online at www.sultlanaremembered.com.