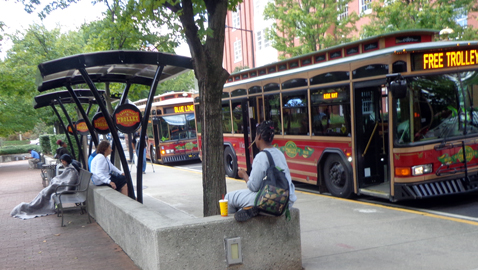 When the Knoxville City Council meets Tuesday one of the resolutions they’ll take up is obtaining property for a KAT bus stop project on Summit Hill Drive. The council is being asked by the Department of Engineering to authorize the mayor to purchase or condemn, if need be, three tracts of real property.

The Summit Hill Stop Project has been promised for several years and the need there is a bit different than in other parts of the city. The transit system cut service there from four stops an hour to one stop, limiting service to the elderly and handicapped residents of Summit Hill Towers. The residents were promised a special shelter on Summit Hill Avenue downhill from their large apartment building and a better way to get there and back for the bus or trolley.

A few weeks ago KAT announced that seven shelters in the city have been installed so far this year and 19 more are scheduled as projects for next year. The planned shelter projects include new ones at Fort Dickerson Park and Island Home Avenue, Kirkwood in East Knoxville, four shelters on Cumberland Avenue, two at Harriet Tubman Street at the Change Center, four along Magnolia Avenue, four at Clinton Highway and Merchants Drive, and the new shelter on Summitt Hill Drive.

The council is being asked to authorize $78,550 to the property acquisitions for the Summitt Hill shelter project.

In an unrelated transit resolution the council may authorize the mayor to enter an agreement with the Tennessee Department of Transportation for an accelerated bus corridor project on the Broadway Corridor.

Greenway projects are on the agenda as well. The mayor may be approved to apply for a $2.3 million grant from the state to build the Northwest Greenway Connector. If received it would be matched with $466,287 in city funds.

The council may also approve another five-year lease with Knox County and Young-Williams Animal Center and the council may give the Boy Scouts $5,000 from police funds in an ordinance requested by the Knoxville Police Department.

Another $140,000 is being requested by the police department to be donated to the Family Justice Center to help fund operations there.

The Office of Redevelopment is asking the council to authorize $1.5 million for construction of the Suttree Landing Park Boathouse and Pavilion.

The meeting should see the second and final votes on the city’s new parking ordinance and votes on whether or not to allow multi-dwelling structures as a use permitted on review in Commercial Zones C-3 and C-6 zones.