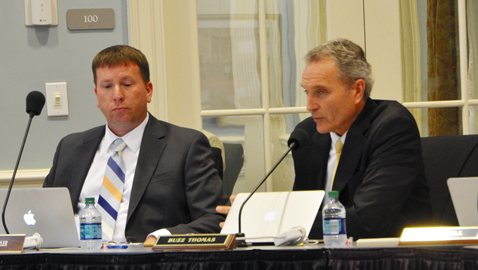 He made his plan public at Tuesday’s Board of Education workshop meeting at the Andrew Johnson Building.

Knox County Schools has been plagued by lack of bus drivers for the last few years and Thomas is proposing that the school system hire a transportation logistics expert but said that he knows that the problem won’t be solved overnight.

“We want to hire a transportation logistics expert,” Thomas said. “It’s going to take a while but we’ll get it done.

“We currently have 70 different contractors and we are currently pre-purposing some funds that we have in our budget. We’ve been in touch with the mayor’s office, the University of Tennessee, some trucking companies and some transportation experts.”

While still in the inaugural planning stages, Thomas said that the funds to hire a transportation logistics expert will be revenue-neutral. He noted that the funds will be transferred from the school system’s security budget.

He also said that the money was made available because the school district was unable to fill some open security positions throughout the county with competent personnel.

He also assured the board that each school has enough security after board member Gloria Deathridge asked about the state of school security.

The locations for the forums were unavailable at press time.

“We wanted to hold off on announcing the location until the new board chairman and co-chairman are in place,” Thomas said. “We will also have a website where we will solicit on-line comments from the public.”

Harrington has already joined the school system while Drummond will officially come aboard later this month.

Resmondo received her award Wednesday, She was one of 219 educators to be honored nationwide.