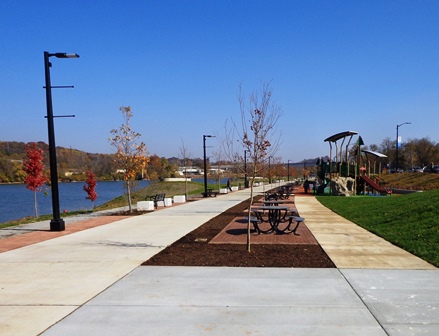 Why is the city’s newest park called “Suttree?”

The ribbon cutting at Suttree Landing Park and Waterfront Drive Wednesday across the river from downtown opened the first city-built park in twelve years. The 8-acre park has festival lawns, a playground, a put-in for kayakers, river overlooks with picnic tables and a public Riverwalk.

The new Waterfront Drive, almost 3,000 feet long, is a two-lane route and includes sidewalks, trees and landscaping. The park and the drive were built for $6.6 million.

The park, at 901 Langford Avenue, also has parking and is served by a KAT bus route at Sevier Avenue and Dixie Street. Mayor Madeline Rogero and several others spoke at the ribbon cutting and noted that more than $160 million has been committed in the South Waterfront commercial corridor along Blount, Sevier and Island Home area.

Rogero praised the Redevelopment Department, Parks and Recreation and Engineering staff for their work on a project that started many years ago but only was realized now. She also thanked the city’s contractors, past city officials, and the neighborhood associations for their promotion of the concept.

But why name the park “Suttree?”

Cornelius Suttree is a character in the first novel written by Knoxville’s Cormac McCarthy. Set in 1951 Knoxville the book follows the life of a man who gave up his wealth and became a fisherman on the Tennessee River. The light-hearted novel features Suttree’s misadventures along the edges of local society. He lives on a houseboat after leaving his wife and son and abandoning his wealthy father.

Suttree interplays with the misfits he encounters at a work camp, a prostitute girlfriend, and other characters. When a black friend is killed in a fight with police, Suttree leaves Knoxville in search of a happier life.

McCarthy is said to have drawn from his own life for the novel, his first in a series of successful books. The son of a wealthy family, his father relocated them from Rhode Island to Knoxville. McCarthy attended Knoxville Catholic High School and the University of Tennessee, where he dropped out to pursue his writing. He married and abandoned his father’s household, renting a cottage in the foothills of the Smokies with no water or heat.

His marriage fell apart and his wife took the child and moved to Wyoming.

It is said that McCarthy’s boyhood friend, Jim Long, was used as the model for the character of J-Bone in his Suttree novel.

Rumors of McCarthy’s death last year circulated on the internet but were not true.