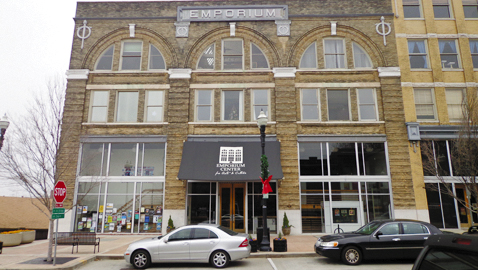 Photo by Mike Steely.
The Emporium, former the site of the Sterchi Brothers headquarters, now houses the Arts and Cultural Alliance and other art related offices and studios.

Here and there around Knox County are several noted buildings that many people pass without knowing the story behind the structures. There are lots of early structures that have a unique beginning and have survived the years to be used for many different purposes.

The Fountain City Building, the Emporium Building on North Gay Street, and the Candoro Building in Vestal are great examples of these historic structures. These three structures are among the many historic homes and buildings that continue to be in use, many restored or renovated for occupancy or businesses.

The Fountain Head Building was also used as a medical office, a bank, and the office of a stone mason who builtseveral buildings including the First Baptist Church of Fountain City. It also has housed a barber Shop, a Five and Dime, a Post Office, Furniture Store and a White Grocery Store.

Jack Anyx, President of Fountain City Finance, explains that the original building on the corner of Broadway and Hotel Street was wooden and burned about 1941. It was replaced with the current building, built of rough-hewn marble. He said that Fountain City Finance, Edward Jones Financial and ReMax Preferred Properties now occupy the building, adding that the Wallace Barber Shop once occupied where the Edward Jones office is and that Country Music Star Roy Acuff learned to play music there.

Built in 1898 by the Sterchi Brothers, founders of Sterchi Furniture and Sterchi Dairy Farm, the Emporium is a grand structure that serves as the hub of the revitalized 100 Block of North Gay Street.

The building is unique in more ways than one. Not only did it serve as the headquarters of the large Sterchi chain but it and other buildings along the block are actually now entered on what was originally their second floors. When the railroad next door became a traffic problem for the increasing number of cars and trucks a bridge was constructed and the street elevated to meet the bridge.

The Emporium Center is available for rent for special functions such as weddings and receptions. You can call (865) 523-7543 for information or visit their web site at www.knoxalliance.com.

Candoro Marble Works Showroom was built in 1923 by famed Knoxville builder Charles Barber and features an entrance hall made of East Tennessee pink marble. The floor is of black and white marble tile. Four marble columns, created by Italian-born carver Albert Milani, are at the garage.

The word “Candoro” come from the letters of the owners Craig, Anderson, and Rogers. The building is currently under renovation and normally would house special events. It will be available again in June. It was added to the National Register of Historic Places in 1996.

The marble operation there stopped in 1982 and the South Knox Heritage preservation group purchased the building. The Vestal neighborhood now uses the building to host the annual “Vestival” each May.

The notable building is located just off of Maryville Pike (State Highway 33) along Candoro Road. For years the facility finished marble from various sites owned by the John J. Craig Company including stone from quarries near Concord and Friendsville.

Marble from the Knoxville and East Tennessee area became so popular and profitable that the city was once known as “Marble City.”

While these three buildings survived and there are many structures that are in danger of being demolished or left to the ravages of time and weather.

There are many, many other structures in Knox County that are noteworthy. Several are being, or have been, restored and today house businesses, offices and homes. Knox Heritage publishes an annual list of the “Fragile Fifteen” properties and also annually recognizes those people and companies for their effort in preserving property.     The current Fragile Fifteen includes the Fort Sanders Neighborhood, the Eugenia Williams House, The Tennessee Supreme Court Building, the Isaac Anderson Cabin, Pryor Brown Garage, The French Broad Corridor, the Legg-England House, Kern’s Bakery, Standard Knitting Mill, several UT buildings, the Magnolia Avenue Corridor, various Historic School Buildings, Knoxville College, The H. E. Christenberry Houses, and the Lloyd Branson House.