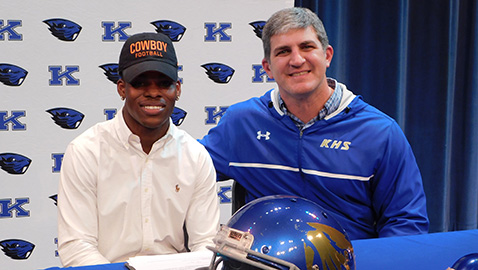 But Thomas Harper, who didn’t start playing football until his sophomore season at Karns in 2016, also signed with the Cowboys Wednesday and will be joining his brother and Coach Gundy in Stillwater as an early enrollee in January.

The younger Harper, who developed into one of Knox County’s top high school players as a wide receiver and defensive back, received 13 offers from other schools, but his decision wasn’t a difficult one.

“When they offered me, I knew where I wanted to go,” said Thomas, who got the offer last summer and committed to the Big 12 Conference school just before the start of his senior season.

His older brother was “a huge factor” in his choice, “because he told me from a first-hand account what it was like at Oklahoma State,” said Thomas at a signing ceremony in the Karns auditorium.

“He has a lot of God-given talent,” said Karns Head Coach Brad Taylor. “But he’s very self-motivated, very driven, with high character. He enjoys working at football, whether it’s in the weight room or doing football drills on the field.”

That combination of talent and work ethic is “kind of rare to find,” added Taylor, whose first season at Karns in 2016 also was Thomas’ first season in football.

“On top of that, he also takes that work ethic and goes in the classroom and makes very good grades as well. His GPA is almost a 3.4 and that’s taking honors classes and AP classes. He’s just a great young man and has great parents (Alacia and Kevin). We’re really proud of him.”

Harper just played basketball growing up. His older brother and others encouraged him to play football and he was going to play his freshman year but broke his thumb and decided to wait and start as a sophomore.

He played basketball at Karns until this year, when he decided to concentrate on football.

Devin Harper was a standout running back and linebacker at Karns but now is a redshirt sophomore linebacker in OSU’s 4-2-5 defense.

Coach Taylor said Thomas was recruited as a defensive back, but there’s been some talk the Cowboys may take a look at him as a slot receiver.

“Whatever they want me to play, I’m going to be happy to play,” said Thomas. “I’m just happy to be able to play there.”

Other things Harper said he liked about Oklahoma State were its family atmosphere and coaches that are down to earth.

“I like the campus as a whole,” he added. “It’s really in the middle of nowhere. There’s not too much to do, so I will be focused in school.”

Harper is considering a major in Engineering.

As for football, Harper said the “overall goal is to get to the NFL. The Lord willing, I hope that happens. I’ll just keep working.”