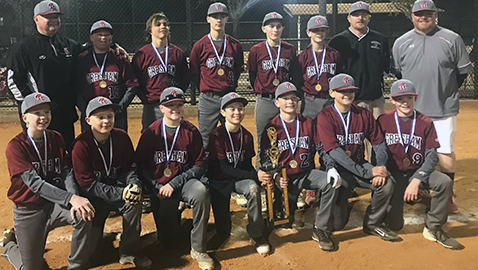 Andy Bolton was part of a great era in Central High baseball. Now he’s doing what he can to bring back more glory days on the diamond for his alma mater.

Bolton was a pitcher and outfielder on Central’s 1990 state title team and went on to play at Carson-Newman as an outfielder.

“We have one player that’s a home school student, but the rest of them plan on being Central Bobcats and I think even he plans to enroll at Central when he gets to be a freshman,” said Bolton.

“That was a big thing for us, even though it (the league) is not sanctioned by Knox County Schools. If kids weren’t planning on going to Central, then that wouldn’t line up with what we were trying to get accomplished. We want to prepare them to help Central’s program.”

That should be good news for first-year CHS skipper Devan Parrott, who wants to have a strong feeder system in the Fountain City area.

South-Doyle defeated Gresham 7-2 in the league’s post-season double-elimination tournament to force an “if necessary” game, which Gresham won to wrap up its title with an 18-2 record.

“Of all the teams I’ve ever played on or coached, this team had as good of chemistry as any team I’ve ever been associated with,” said Bolton. “The kids worked hard all winter and throughout this spring season.

“We didn’t have any attitude issues. There was no individual that tried to put himself above the team. They really worked well together and were easy to coach. When you’ve got that combination, you have a chance to have a pretty good season.”

Zach Helton, son of the late Joel Helton, longtime Central football coach, had been coaching Gresham’s JV and varsity teams in recent years. The CHS product was an infielder at the University of Memphis.

“Zach’s third son was born this past off-season,” said Bolton, “and he felt he needed to stay home and help his wife.”

Bolton volunteered to coach the JV team (sixth and seventh-graders). Kevin DeBusk is the head coach of the Gresham varsity team (eighth-graders).

“As for the seventh and eighth grade players, I think there’s enough talent at Gresham right now that by the time they get to Central they ought to have a chance to compete in the KIL and represent Central in a positive light,” added Bolton. “So hopefully they’ll continue to progress and good things will be coming down the road for them at Central.”