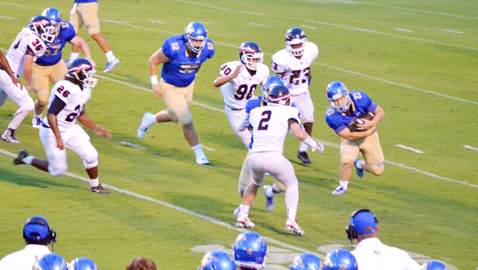 A freshman and sophomore combined for three touchdown runs in South-Doyle’s 34-3 win at Karns as the Cherokees ended a 12-game losing streak and enjoyed their first win since the 2014 season.

South-Doyle hardly looked like a team that would struggle throughout another football season. The Cherokees’ talented youngsters are growing up and they have some veterans contributing as well. Now 1-1, with a season-opening loss to Central in the rear view, South-Doyle is looking forward to its first region test this week against visiting Heritage.

“We don’t live in the past,” said Duncan. “The past is the past as far as wins and losses are concerned. This football team has lost one game and has a chance to be very good.

“I thought we played pretty good tonight in all three phases of the game.

We’re anxious to get ready and play Heritage and see what the future holds for this team.”

Karns, rebuilding under new head coach Brad Taylor, showed flashes of promise as it dropped to 0-2. The Beavers will have a realistic chance of breaking the win column this week when they host winless Clinton.

Freshman Elijah Young scored on runs of two and six yards and sophomore standout Ton’Quez Ball hauled in a 55-yard touchdown pass from senior quarterback Caleb Wender as South-Doyle pulled away from Karns. Senior running back Kent’ta Tanner also tallied twice for the Cherokees on runs of three and 43 yards.

Sam Frazier kept Karns from being shut out with his 37-yard field goal late in the first half that pulled the Beavers within 20-3.

Tanner’s sprint down the left sideline on the first play after intermission dimmed the Beavers’ comeback hopes.

The Cherokees opened the game with an 18-yard run by Jake Harper and their drive included a TD pass to Ball nullified by a holding penalty.

Karns put together three first downs on its first possession, but its march stalled at the South-Doyle 28.

Trailing 7-0, the Beavers had a big play turn sour early in the second quarter when tight end Drew Weaver caught a 27-yard pass from Daniel Kitts but fumbled and linebacker Devonte Gunter recovered at the S-D 45. Two plays later, Wender hit Ball over the middle and he broke to the outside and couldn’t be caught. Austin Morse’s PAT kick made it 14-0.

A trick play by South-Doyle late in the second quarter may have been the call of the game. Facing fourth-and-10 at the Karns 48, the Cherokees, in punt formation, snapped the ball to the up-back, AJ Nunn, who is a backup QB, and he threw a 41-yard pass to Ball for a first down at the Karns 7. Tanner finished it off two plays later to extend South-Doyle’s lead to 20-0.

Linebacker Clarence Jackson sacked Daniels on the first play of the second half to put Karns in a hole. An interception by Austin Shuler halted Karns’ next possession and the Cherokees’ offense responded with a 77-yard scoring drive and Young’s second TD for the final score of the game.

“I believe a team learns more from Week 1 to Week 2,” said Coach Duncan, “and we made some great strides from last week to this week.”