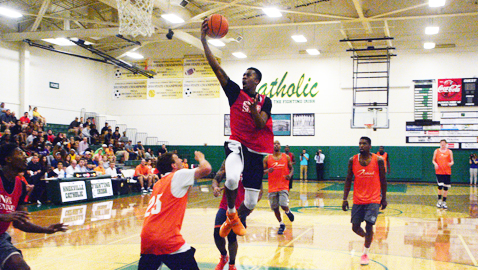 Dwight Tarwater enjoyed a homecoming of sorts when he suited up for H3 Sports in its season opener in the Pilot Rocky Top League opener Wednesday night at Catholic High School.

Tarwater, a 2010 Webb School of Knoxville graduate, last played in his hometown shortly after his high school graduation. That was also in the Pilot Rocky Top League at Bearden High School.

The venue for the league may have changed but Tarwater said that the chance to play in Knoxville — and at Catholic High School was special for him.

“I love playing in this gym, said Tarwater who recently wrote the final chapter of his collegiate career at the University of California in 2015-16. In Berkeley, he played for former Tennessee coach Cuonzo Martin. “I have some great memories of playing in this place. But I have some frustrating memories too.”

Webb and Catholic are intense Cedar Bluff area private school rivals and Tarwater and the Spartans had an intense rivalry with the Irish.

During his time at Webb, Tarwater scored 1,500 points and won Division II-A Mr. Basketball honors in 2010. Later that year, the three-time all-region and two-time all-state post player played in the Pilot Rocky Top League. That summer was the last time that he played in Knoxville before Wednesday night.

Tarwater’s collegiate basketball career took him to Cornell for four years. He graduated and was granted a fifth year as a graduate transfer. That allowed him to head west to California’s Bay Area where he played in all 33 games for the Golden Bears last season.

He enjoyed his time in the Northeast and on the West Coast. But he was ready to come home.

“It’s great to come home and play,” Tarwater said. “California is great but the folks there are different than they are here.

“I’m six months away from earning my Master’s,” he said. “I’m getting my degree in Public Health. I’m not quite sure what I’m going to do with that.

“Learning has always been important to me. That’s what’s going to get me where I want to go.”

Tarwater is prepared for life after basketball but for now, he’s relishing his time playing in front of his hometown fans.

“Basketball has been great. I’m going to enjoy playing here,” he said. “But I’m also looking forward to what the next chapter of my life will bring.”