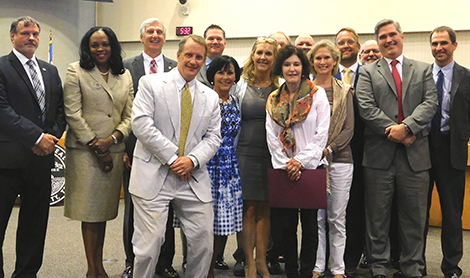 The Dover Corporation is in the process of renovating the former Tennessee State Supreme Court building which sat vacant for about 20 years. The city has already granted a payment-in-lieu-of taxes agreement and last week the Knox County Commission agreed also.

While the tax break is based on the current assessed value no taxes have been paid by the state or the city, which assumed ownership of the large complex at 719 Locust Street. The matter was discussed during the commission’s work session the previous week.

The commission passed a break for both the hospitality proposal and the multi-family proposal within Dover’s request. The developer is planning a $73 million investment in renovations and improvements.

Knox County Finance Director Chris Caldwell told The Focus that the building is being appraised at $2.6 million, about what the city paid the state. Over the 25-year tax break, the agreement will generate $ 22,000 each year in county taxes.

In other action the Knox County Commission passed a denunciation of threats of violence against the LGBT community and affirmed equal protection rights to all citizens. Chairman Hugh Nystrom read the resolution which included “WHEREAS, in light of current events, the Knox County Mayor and County Commission wish to confirm and state with emphasis that all of these rights of protection, and due process of the law, fully extend to Knox County citizens who are members of the LGBT community.”

Knox County’s outside audit firm, Pugh & Company, were granted a one year extension of their contract on the recommendation of the audit committee.

Linda Reeves was chosen over two other applicants to join the air pollution control board. Mike Conger was reappointed to that board and Robert R. Scott was also appointed. Reeves takes the seat representing Pellissippi State community College.

Geosyntec Consultants were hired to do a flood control study in the county for $198,000 on the recommendation of engineering and public works and Waste Management Inc. was approved to service Knox County agencies, schools, and Public Building Authority facilities.