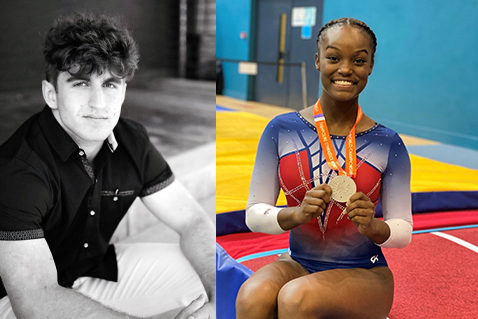 “This sport is so amazing,” said Tia. “It has taught me many life lessons and has given me a lot of opportunities.”

It’s taken her to many places – Russia, Spain, Japan and Azerbaijan twice. Azerbaijan is located at the boundary of Eastern Europe and Western Asia.

Taylor hasn’t just been sightseeing in these faraway places; she’s been excelling in her sport. Named to the United States’ national tumbling team the past four years, she has medaled internationally, taking second place in Spain and third in Azerbaijan the first time she went there, and then helped Team USA win the silver team medal in 2021.

Just this past weekend, Taylor competed in Des Moines, Iowa in the USA Gymnastics National Championships.

Taylor started out in tumbling and trampoline.

“I don’t do trampoline anymore,” said Tia. “I used to about four years ago, but I just happened to excel in tumbling more.”

She has been tumbling for eight years at Premier Athletics North and her coach is Eric Thomas.

Taylor will be attending UT this fall, majoring in Kinesiology.

Three-sport athlete Leo Bonifacio is Webb’s male Student-Athlete of the Year for 2021-22. He competed in football, wrestling and track for the Spartans.

Bonifacio, a 6-3, 230-pound linebacker and offensive guard at Webb, earned All-State and All-Region honors and was the region’s Defensive Player of the Year. He also was a three-time state qualifier in wrestling.

Bonifacio will be tackling a different sport in the future as he has signed to play rugby at UT.

“I’ve never played rugby before, but I am learning the game pretty fast,” he said. “I go play touch rugby at Tennessee rugby park during the week. Wrestling especially translates well with the tackling technique and conditioning-wise.”

Leo plans to major in Biomedical Engineering and either go to medical school to become a psychiatrist or go to graduate school for Neural Engineering.