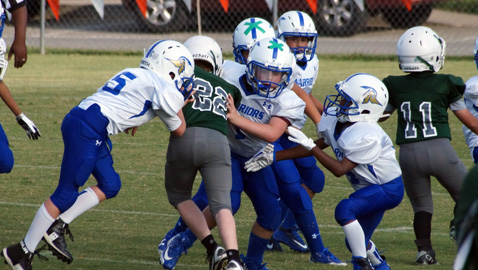 Not including 6-under “flag” football teams, there were 102 teams in the KMYFL in 2016. That included teams in the 7U through 14U age divisions and is the lowest number of “tackle” teams in the league for a season that the Knoxville Parks and Recreation Department has on file. Aaron Browning, Deputy Director of KPRD, provided the information.

For those who hope youth football will continue, despite health concerns in recent years, the good news is that there is an increase of 12 “tackle” teams this season.

Team totals this season per division: 13 in junior hoppers, 17 in grasshoppers, 18 in grasscutters, 19 in minor peewees, 17 in peewees, 14 in junior varsity and 16 in varsity.

Flag football teams have increased from 15 teams in 2015 to 25 teams this season.

City and County youth football programs joined to form the Knox Metro Youth Football League in 2001. No team participation information is available from 2001 through 2008 or the 2011 season.

Three teams from the Oak Ridge Boys Club have joined the KMYFL this season. The new teams are a 7U junior hopper squad, an 8U grasshopper squad and a 9U grasscutter squad.

Up until this year, Oak Ridge had enough players to have two teams per division – Oak Ridge East and Oak Ridge West – in the Volunteer Conference, which is comprised of many programs in neighboring Anderson County.

“Our numbers were down and we had to combine two teams into one,” said Alonzo Howard, an assistant coach for the Oak Ridge 8U team. “Even after combining, we have 17 total players. In past years when we had two teams in each age group, we had about 15 players per team.”

The decline in players in Oak Ridge is the result of news regarding chronic traumatic encephalopathy (CTE) and other factors, Howard believes.

“There’s so much other stuff kids have to do these days,” he said. “In society, parents are not having as many kids, either.”

Howard said the Oak Ridge players like the competition they’re getting in the KMYFL and it is keeping them motivated.

“It’s definitely the competition we need for our boys to get on track for middle school and high school football,” said Howard, who was a backup sophomore quarterback on Oak Ridge High’s 1991 Class AAA state championship team.