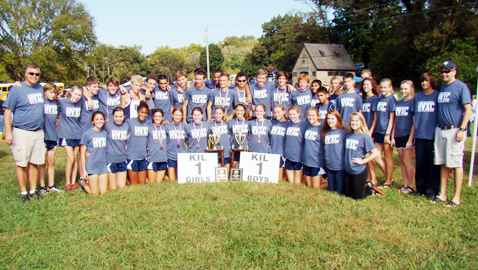 Photo by Steve Williams
Hardin Valley Academy boys and girls cross country runners made it a clean sweep in team and individual competition at the KIL meet last week.

After breezing to victory in the annual Knoxville Interscholastic League cross country meet and taking a few seconds to catch his breath, Aaron Templeton didn’t leave for the tent area. Instead, he stayed to shout encouragement to his Hardin Valley Academy teammates as they approached the finish line.

Templeton, the defending TSSAA Class AAA state champion, explained after the meet that was an example of his desire to be a team leader for the Hawks in his senior season.

“My freshman year, Hardin Valley won state, and I was on that team,” said Templeton, “That was just a great feeling, but ever since then our team has been kind of stagnant, so this year I’ve tried to really become a leader for the team and I’m trying to motivate the guys.”

When it comes to racing cross country, Emma Mashburn doesn’t care about being the pacesetter. Sometimes, though, she finds herself in that position.

“It’s kind of a hard place to be,” said the Hardin Valley Academy senior after leading from start to finish in winning the KIL championship for the third year in a row.

“This year has been kind of hard because I don’t have my racing buddy, Hannah (Feiten), out there with me. I really don’t know what pace to push and how to push. I like it when there’s people up there I can feed off, but I feel like I still got strong.”

Mashburn was clocked in 18 minutes, 37.70 seconds. Rebecca Story, an eighth grader at Christian Academy of Knoxville, came in second at 18:43.48.

Bryan Brown, Hardin Valley coach, said the sweep of team and individual titles was a good way to start the “championship season” portion of the schedule.

“Obviously, our biggest goal is the state meet every year,” he said. “But this is our county championship and we treat it as such. It’s a points race. We don’t really worry about time. We just care about beating other teams and racing for points. We need to run well here to move our primary goal forward and reach the state.”

One hundred and ninety boys and 131 girls competed in the annual event.